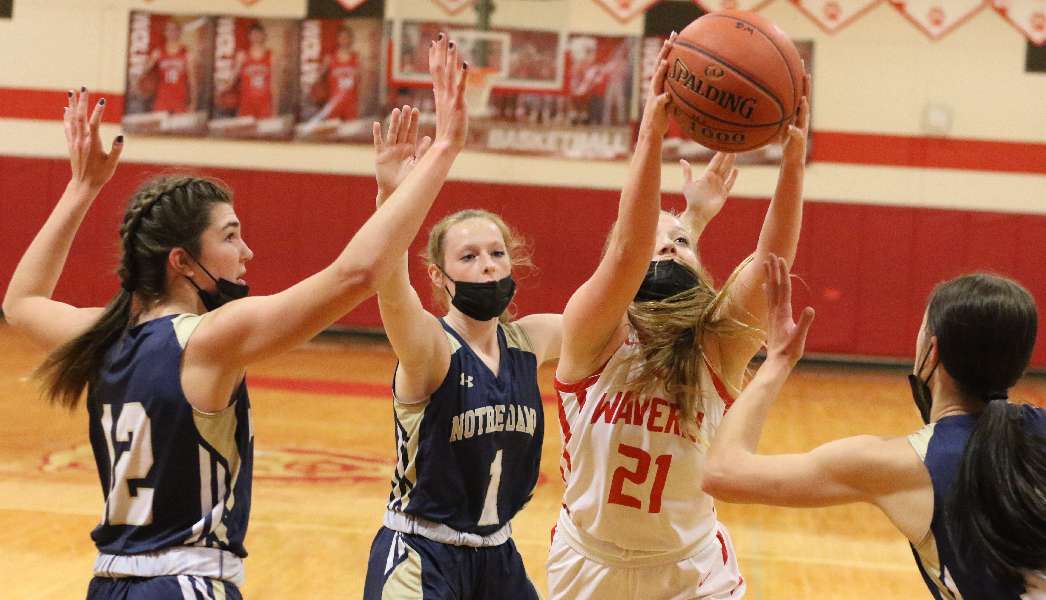 Junior Kennedy Westbrook's conventional three-point play nearly three minutes into the game gave Waverly a 3-0 lead, but Notre Dame's Shannon Maloney answered with a short jumper off the glass on the next trip down the court to make it 3-2.

Senior Olivia Nittinger canned a 3-pointer, and freshman Addison Westbrook turned a steal into a lay-up to give the Lady Wolverines an 8-2 lead with 3:55 remaining in the first quarter.

Jordan Fargo knocked down a short baseline jumper for the Lady Crusaders with 3:12 left in the first quarter to trim the deficit to 8-4, but they wouldn't score again for nearly 11 minutes.

Nittinger drained a 3-pointer about 20 seconds later to spark an 11-0 spurt to close the opening stanza. Addison Westbrook closed out the first-quarter scoring with a 3-pointer to make it 19-4.

Nittinger knocked down another 3-pointer, off an assist from sophomore Paige Robinson, with 3:45 remaining in the first half to extend Waverly's lead to 25-4.

Less than a minute later, Nittinger and Addison Westbrook canned back-to-back 3-pointers in a 10-second span to extend the lead to 33-4 with 2:49 left in the first half.

Nittinger kept it rolling with a 3-pointer, and sophomore Peyton Shaw capped the 27-0 blitz with a putback on the offensive boards to make it 38-4 with 55 seconds remaining in the half.

After a three-point play by senior Lourden Benjamin, and back-to-back fast-break buckets by Kennedy Westbrook put Waverly up 45-5, Payton Rimany-Miller canned a 3-pointer from the wing for Notre Dame's first field goal in 15 1/2 minutes.