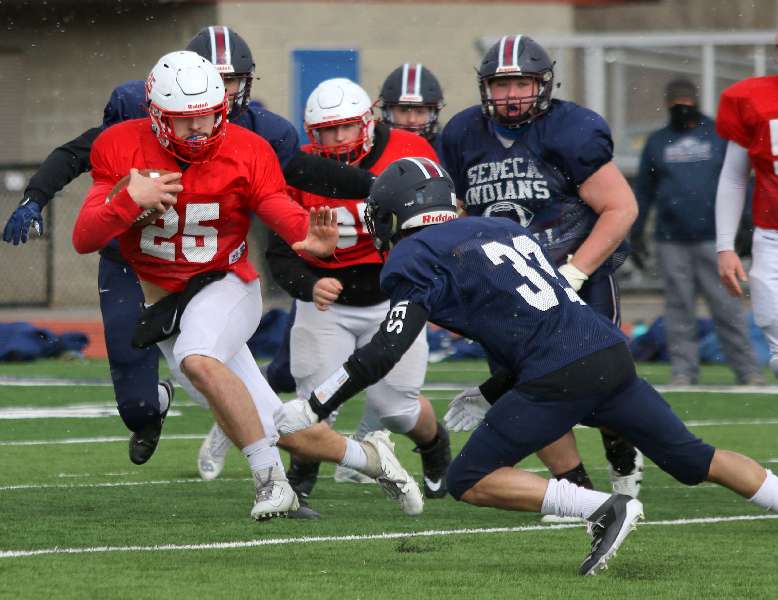 WATKINS GLEN — Longtime Waverly coach Jason Miller started the preseason with a young team, and not a great deal of time to prepare for Friday’s season-opener against Tioga.

The Wolverines were busy this weekend, scrimmaging against Binghamton Friday, and here against O-M / Watkins Glen Sunday afternoon.

“We need the work,” laughed Miller.

“We’ve had a good weekend, and played a lot of football in the last week.

“We’ve got a lot of work to do, but we wanted to create an intense situation — a game-type of situation, and I thought our kids responded pretty good,” said Miller.

Each varsity team had two sets of 10 downs on offense. Waverly scored in its second possession against the Seneca Indians defense, while O-M / WG offense scored on both of its possessions agains the Wolverine defense

“We haven’t had a lot of inside contact like this,” said Miller. “(O-M / WG) has some stout kids in there, and some pretty good players … and they did a pretty good job.

“We have not practiced one bit against an odd-stack like that, or that type of offense with the wide alignments,” added Miller.  “And, when we put some of the young guys in it wasn’t as good as it should be.”

Strong gusting winds that made the 33-degree temperatures made it feel like 18 degrees also had an impact.

“Obviously the conditions were not conducive for throwing the ball, and that’s what we like to do,” said Miller.

After the junior varsity portion of the scrimmage, the two teams had two possessions in a “live” scrimmage.

Waverly put together a pair of time-consuming scoring drives, while the Wolverine defense forced a pair of turnovers on downs without allowing a first down.

“We played much better in the live situation,” said Miller.

“We ran the ball pretty effectively … methodically,” noted Miller. “We didn’t pick up big chunks of yards, but we were getting four or five yards a crack, and that’s OK — that’s what we want to do.

“We have young linemen. This is the first time they’ve really been in this mix. They did a decent job.

“And, I’m pretty happy with certain kids on defense who performed well,” he added.

“We have a huge week ahead of us,” said Miller. “We are going to do everything we possibly can to prepare for Friday.”