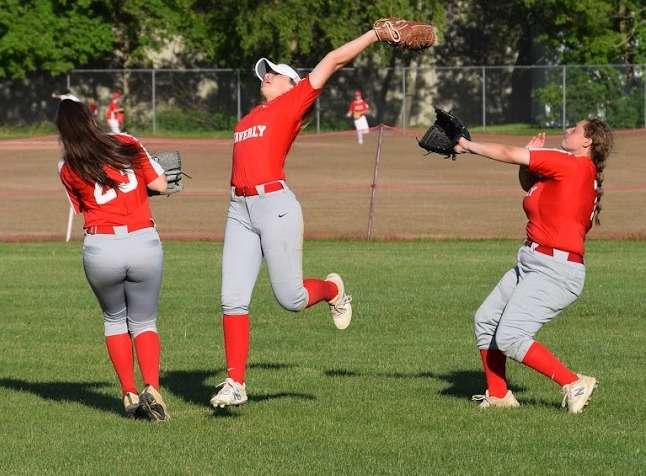 WAVERLY — Waverly took advantage of an error to score a pair of runs in the sixth inning to pull out a 7-5 win over S-VE here Thursday afternoon in IAC softball action.

The win snaps a four-game losing streak for the Lady Wolverines, and hands the Panthers, now 11-2, just their second loss of the season.

S-VE started fast with three runs in the top of the first inning, but Waverly scored runs in each of the first two innings to trim the deficit to 3-2.

The Lady Wolverines loaded the bases in the third inning, but could not push a run across.

In the fourth inning, junior Lourden Benjamin and freshman Peyton Shaw reached on consecutive errors to start the inning. Tomasso stroked an RBI single to right field and advance to third on an error on the play, while Shaw scored, to give Waverly a 4-3 lead.

The Lady Panthers tied the game on a two-out outfield error that allowed two runs to score in the top of the fifth, setting the stage for Waverly’s game-winning sixth-inning rally.

With one out in the bottom of the sixth, Tomasso reached second base on a throwing error. Tomasso advanced to third on a deep fly ball to center field off the bat of Romano, and scored on an RBI double by junior Aubrey Ennis to make it 6-5.

Freshman Olivia Robinson capped the rally with a line-drive RBI single to left field that made it 7-5.

Jenner retired the Lady Panthers in order in the top of the seventh inning to preserve the win.

Jenner earned the win, allowing five runs — three earned — on four hits, while striking out seven and walking two in seven innings in the pitcher’s circle.

Rhianna Lawrence was the tough-luck loser for the Lady Panthers. She allowed seven runs — all unearned — on six hits, while striking out seven and walking four in six innings of work.

Waverly, now 7-9, closes out the regular season June 5 when it hosts Owego.