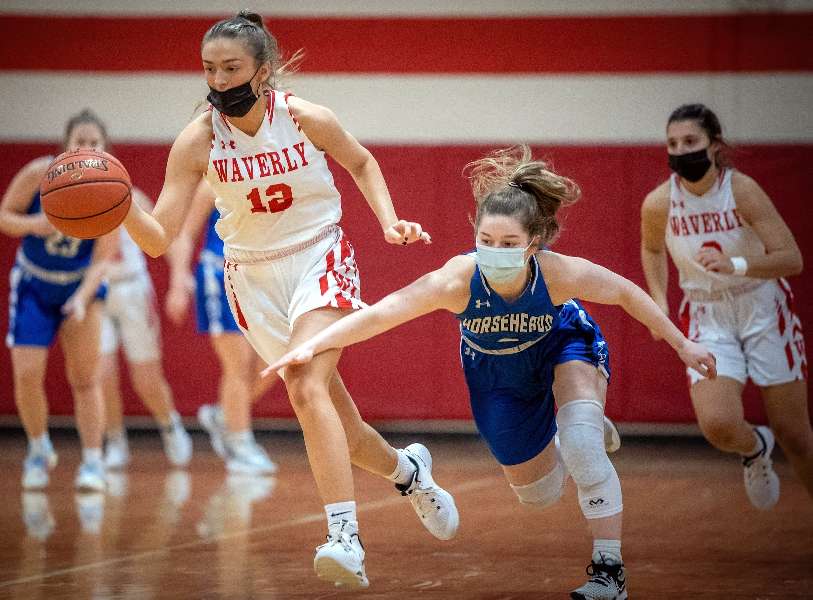 WAVERLY — Waverly went on a 13-0 run in the second quarter to wipe out an eight-point deficit on its way to a 56-43 win over Horseheads in non-league girls basketball action.

Horseheads led 14-9 at the end of the first quarter, and 20-12 with 6:50 remaining in the first half, but Waverly caught fire and scored 13 straight points.

Senior Sidney Tomasso, who was held scoreless in the first quarter, knocked down a 3-pointer with 5:53 left in the second quarter, and sophomore Kennedy Westbrook added a 3-pointer 40 seconds later to cut the deficit to 20-18.

Peyton Shaw tied the game with 4:19 left in the first half, and senior Gabby Picco gave the Lady Wolverines the lead for good 29 seconds later with an old-fashioned three-point play.

Tomasso, who hit two free throws in the final seconds of the second quarter to give Waverly a 27-22 lead at the break, knocked down a 3-pointer with 5:48 left in the third quarter to increase the lead to nine points, at 33-24.

Tomasso’s third 3-pointer of the game with 2:25 left in the third quarter stretched the Waverly lead to 10 points, at 38-28.

A 3-pointer by Westbrook, and a pair of free throws by Tomasso pushed the Waverly lead to 43-29 with 1:02 remaining in the third quarter.

Tomasso, who was 12-for-12 from the free-throw line in the game, made four freebies, sandwiched around a bucket by Shaw, in the first two minutes of the final stanza to extend the Waverly lead to 49-33.

Tomasso led Waverly with 23 points, including a trio of 3-pointers, while Westbrook, who also had three 3-pointers, scored 15 points, and Picco, who hit a pair of treys, added 13 points. Shaw chipped in with four points.