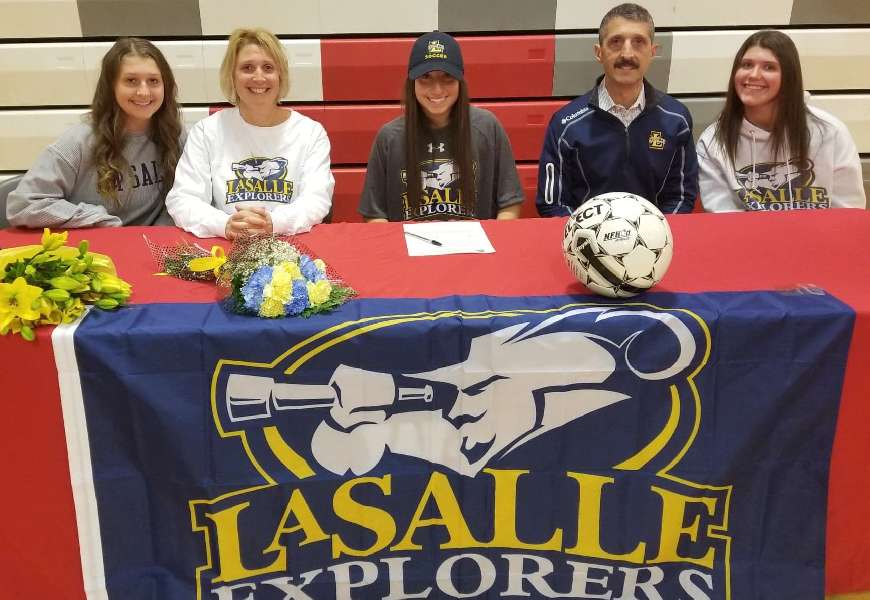 WAVERLY — Waverly senior Gabby Picco made it official Friday afternoon, signing her National Letter-of-Intent to play Division I soccer at LaSalle University during a brief ceremony in the Waverly High School gymnasium.

Picco verbally committed to LaSalle in November. (For Gabby’s thoughts on the recruiting process and her reasons for choosing LaSalle, click here to read original story on her comittment.)

Picco, who started at Waverly as an 8th-grader, was a two-time all-state selection, and a four-time all-IAC first-team all-star, despite not playing her senior season in the fall due to Covid-19 restriction.

Dr. Joe Picco is not only Gabby’s father, but has coached on her travel teams over the years.

“Covid may have been the best thing to happen to Gabby because she really worked hard during her time she had to spend alone,” he told those assembled for the signing. “I give her a lot of credit for being out on the field by herself, and working hard.

“It’s difficult to be a parent-coach, it really is, but Gabby did a lot of it on her own, where her Dad didn’t have to force her to do things,” added Dr. Picco.

Dr. Picco has no doubt his daughter will be successful.

“At BC United, we talk about three things. We talk about work rate, making an impact on your teammates and the game, and leadership.

“I couldn’t be prouder as a coach and a parent of Gabby, and what’s she’s going to accomplish in life,” added Dr. Picco.

“It’s really fun to see how it’s all turned out, and how we’ve all grown up and headed our separate ways,” said Picco.

“I can’t thank all those girls I played with enough for pushing me, and letting me look up to them, and seeing where they’ve gone and what they’ve accomplished,” she added.

“It definitely pushed me, and I think it pushed us all,” said Picco. “All of us, in the Valley, were very competitive.

“And, I played with half those girls in travel ball,” she added. “I loved the competitiveness we all brought … and I’m going to enjoy watching what everyone achieves in the future.”

Athens Area coach Rich Pitts, who coached Picco for years in travel soccer, is amazed by the talent coming out of the Valley.

“I think there’s definitely something in the water,” laughed Pitts.

“Sometimes you just get a burst of classes that have those types of athletes,” he noted. “Then, you take into consideration the youth programs in the Valley, and being able to travel to different places, within a decent distance, to get even more specific training at a higher level. I think that all plays into it.

“This area just oozes talent for some reason,” continued Pitts. “Maybe it’s because you have these three schools, and the rivalries just drive it. It’s really hard to put a finger on the reason.

“I know coaching for five years (at Athens), you don’t seem to lose talent — I mean talent replaces talent,” added Pitts. “It’s a combination of a bunch of things.”