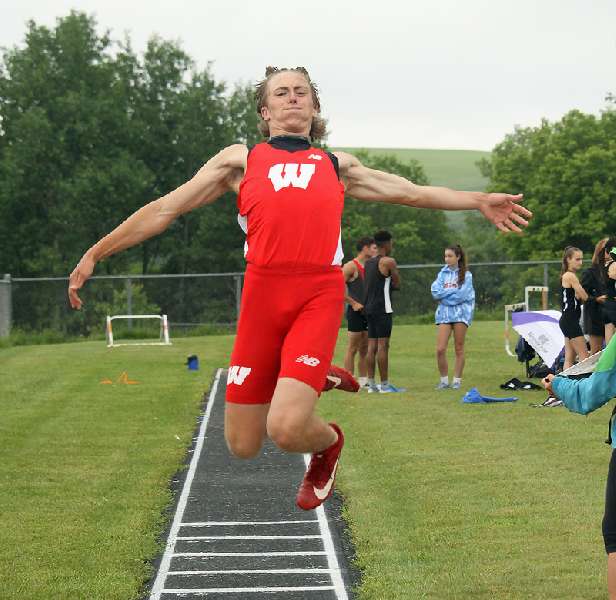 MARATHON — Senior Caden Wheeler won a gold medal, and his classmate Collin Wright won a bronze here Saturday to lead a strong Waverly effort at the Section IV Track & Field Showcase, which featured athletes from nearly every school — 499 in all, regardless of size.

Wheeler won two medals, including one on a relay, while senior Gabby Picco, junior Abby Knolles, and sophomore Kennedy Westbrook were all part of two medal-winning relays for the Lady Wolverines.

BOYS
Wheeler won the long jump with a personal-best 21-feet, 1-inch, but noted he didn’t quite meet his goal.

“It’s a good feeling to win,” said Wheeler. “I didn’t quite get the results I was looking for in terms of distance and overall performance, but I’m happy.”

Wheeler said he had his sights set on the school record of 22-feet, 1-inch.

“I’m not exactly sure what happened, maybe it was the weather,” said Wheeler. “I just don’t put it all together.

“My first and fourth jumps were the only ones marked, I faulted the other four times,” added Chandler. “I believe one of the ones I faulted on may have been it.”

Chandler was pleased to have the opportunity to compete.

“It was good to have a season,” he said. “Last season got cut, so it made us worry we wouldn’t have a season. Just to be out here, even with a short season, was nice.”

“I felt great,” said Wright. “I feel like I ended on the right note for my career.

“I wanted to PR and cut down my time a little bit, and I definitely did that,” added Wright, who knocked more than two seconds off his previous-best time.

Wright ran in third of fourth place for the first two laps, but dropped to fifth early in the third lap. About midway through the final lap, Wright made his more and passed a pair of runners.

“Once the pack condensed a little bit, that’s what prepped me for the move I made on the last lap.

That was the last lap of my high school career, so in that last 150 or so, I just wanted to give it everything I had,” said Wright. “I feel like I laid it down pretty good.”

Like Chandler, Wright was pleased to have the opportunity to compete in 2021.

“It was awesome. It was a crazy year, but I’ll take everything we had,” said Wright. “I really appreciate the opportunity to run, to do what I love doing.”

Wheeler teamed with freshman Micah Chandler, junior Sam VanDyke,and senior Alex Gadow to finish fifth in the 1,600-meter relay in a time of 3:37.24.

GIRLS
Picco, Knolles, and Kennedy Westbrook teamed with sophomore Natalie Garrity to finish fifth in the 400-meter relay in a time of 53.94 seconds.