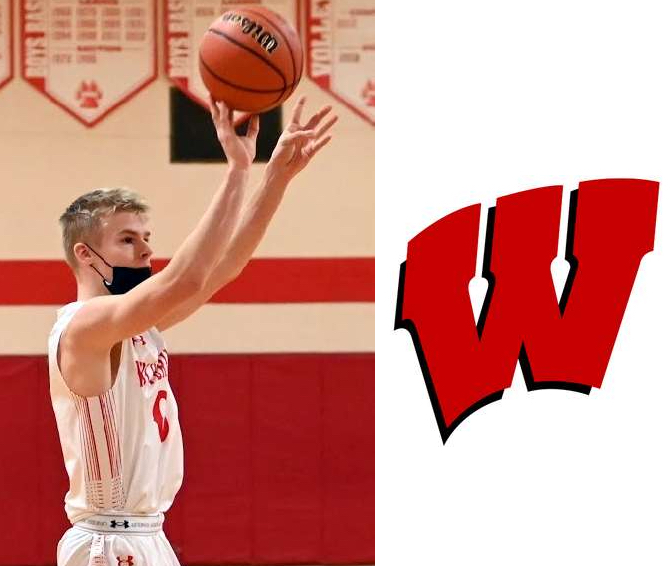 WAVERLY — Waverly did a lot of things teams need to do to win games: created turnovers, limited its turnovers, and pounded the offensive glass being among them.

Throw in a 29-4 third-quarter blitz and it equals a 71-41 Wolverine win over IAC arch-rival Notre Dame here Friday night in boys basketball action.
“It really was a tale of two halves," said Waverly coach Lou Judson. "We probably played our worst half of the season in the first half, then turned around in the second half and played our best half of the season.

“We put it together in the second half offensively," noted Judson. "We can be a very explosive offense when our shooters get going.

“And, we were very active in our defense in the second half," added Judson. "I didn’t like how we were playing man-to-man, so we switched to a different defense in the second half, and it really ignited us. It got us out in transition."
One thing Waverly did not do well in the first half was shoot the ball, connecting on 8 of its 38 shots (21 percent) from the field in first half, including just 1 of 12 from behind the 3-point arc. The Wolverines did, however, pull down seven of their 15 offensive rebounds in the first two quarters and turn a few of them into points.

Malaki Owens scored 13 of his team-high 16 points in the first half for the Crusaders, while junior Davis Croft led a balanced Waverly offense with five points. Both methods were equally effective as the game went to the intermission tied at 22-22.

The second half belonged to the Wolverines.

Freshman Joey Tomasso pumped in 13 points in the third quarter, and four of his teammates — seniors Ryan Lambert and Kobe Decker, and juniors Brennan and Liam Traub scored four points apiece — as the Wolverines raced out to a 51-26 lead heading into the final eight minutes.
"Joey (Tomasso) played very well again tonight," said Judson. "He got in transition in the third quarter, and got some easy points from Ryan Lambert."
Judson noted his four seniors — Lambert, Decker, Ryan Bowen, and Aidan Westbrook — gave the Wolverines a lift in the third quarter.
“Our seniors have been the glue for this basketball game. They started the second half tonight, and really got us going. I’m really proud of them."
Waverly remained hot in the fourth quarter, with Brennan Traub knocking down a 3-pointer and scoring five points, Tomasso adding four points, and Lambert, Liam Traub, and junior Brady Blauvelt each connecting from 3-point range as the Wolverines outscored the Crusaders, 20-15, in the final stanza.

The Wolverines shot 55 percent (21 of 38) from the field in the second half, including 5 of 15 from behind the arc, and had eight more offensive rebounds. Overall, they shot 38 percent from the field.

Waverly turned the ball over just seven times in the win, including only three in the second half, while as a team the Wolverines registered 18 steals, among the 31 forced turnovers.

Waverly, now 7-4, closes out the 2021 season Saturday afternoon at home against S-VE.
“I don’t think this team will reach its fullest potential because the season is getting cut short, but we’re starting to play pretty well.

“I like how we’re trending right now," said Judson. "We’re getting a lot of guys in the game, and getting our juniors a lot of playing time to prepare them for next year."