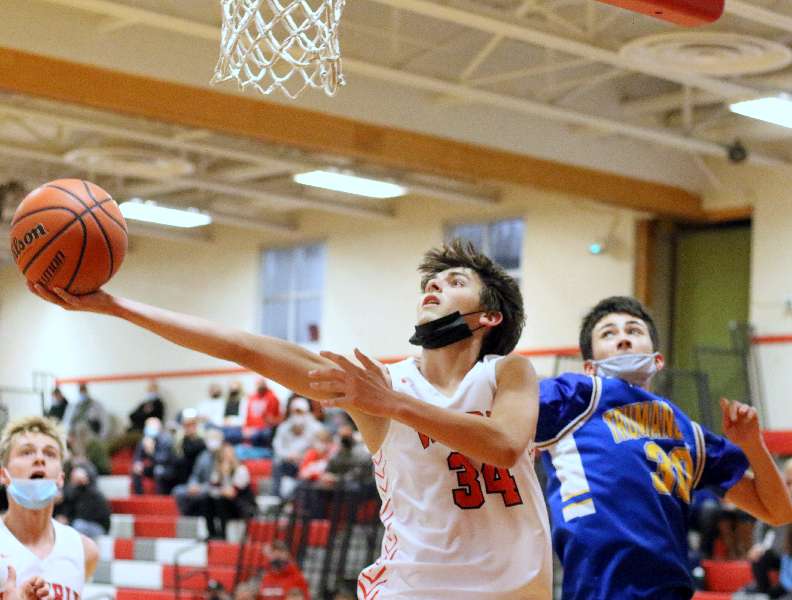 The first quarter resembled a track meet. With Waverly pressing full-court, and Trumansburg employing a half-court trap, both teams were able to get out in transition.

Waverly coach Lou Judson pulled his team out of the full-court press late in the first quarter, and fell back into a zone.

“We were giving up some easy points off of us pressing, and (Trumansburg) was kind of getting by us and scoring, so we had to change up the defense, and that turned the tide for us.

“It was a really sloppy first half for us,” said Judson. “We were probably lucky to be up 12 at the half.

“We didn’t play all that well in the first half, and I thought Trumansburg really came ready to play, especially being a couple guys down,” he added. “They played really hard, and contested us early on.”

Seniors Liam Traub and Davis Croft scored five points apiece in the first quarter, and senior Brennan Traub canned a 3-pointer to help Waverly to a 15-14 lead after the first eight minutes.

Midway through the second quarter, Brennan Traub knocked down a 3-pointer, then stole the in-bounds pass and hit Liam Traub cutting the to bucket. He was fouled and made both free throws to give Waverly a 29-19 lead with 3:22 remaining in the half.

With 50 seconds remaining, junior Nate DeLill floated a lob pass to Tomasso, who caught the ball and finished off the lay-up to make it 33-21.

The teams traded free throws in the final 30 seconds, and Waverly took a 34-22 lead to the halftime locker room.

The Wolverines went back to its full-court pressure to start the second half, and opened with a 15-0 blitz to take a 49-22 lead with 4:55 remaining in the third quarter.

“With this basketball team, keeping their focus can be a task,” said Judson. “We’ve won seven games in a row by an average margin of 30 or 35 … and our guys see the scores of the other teams, (Trumansburg) just barely beat Newark Valley, which we beat pretty handily.

“I think we just came out, and we weren’t focused,” noted Judson. “At half, we just re-focused, and we started making some of the shots we missed in the first half.

“I  think it was one of those things, where the guys just decided to start playing, too,” Judson added. “At the end of the day, when you win by 30 on your home floor, you’ll take it as a coach.”

Brennan Traub and sophomore Jay Pipher each knocked down 3-pointers early i the third quarter, and senior Brady Blauvelt, Croft and Tomasso added buckets in transition.

Trumansburg broke its scoreless drought with 4:33 remaining in third quarter, citing the deficit to 49-25, but Waverly finished off the quarter with an 11-6 spurt to take a 60-31 advantage into the final eight minutes.

Brennan Traub led Waverly with 17 points, three steals and two assists, and Blauvelt had four points, a career-high 11 rebounds, and two assists to lead the Wolverines.

“Brennan (Traub) has been a consistent scorer for us all season, and he made some big shots tonight,” said Judson.

“And, Brady Blauvelt does all the little things for us that a lot of times go unnoticed,” added Judson. “His rebounding was very, very key for us tonight.”

DeLill had eight points, including a pair of 3-pointers, and two assists for the Wolverines, while senior Declan Murphy had six points and three boards, and sophomore Jake Benjamin added four points and one blocked shot

“Joey (Tomasso) was a little bit off tonight, but other guys stepped up; that was good to see,” said Judson.

“I’ve been very pleased with the play of the guys coming off the bench,” added Judson. “Nate DeLill hit two 3s and scored eight points, and Declan Murphy had six points.”

Waverly, now 11-3 and winners of eight straight, are back in action Thursday at Troy — Judson’s alma mater.

“We’re going to have our hands full Thursday at Troy,” said Judson. “It’s going to be a lot of fun for a lot of people. I’m looking forward going back to my alma mater and coaching against Coach (Steve) Renzi, who is a good friend — and former teammate — of mine.”