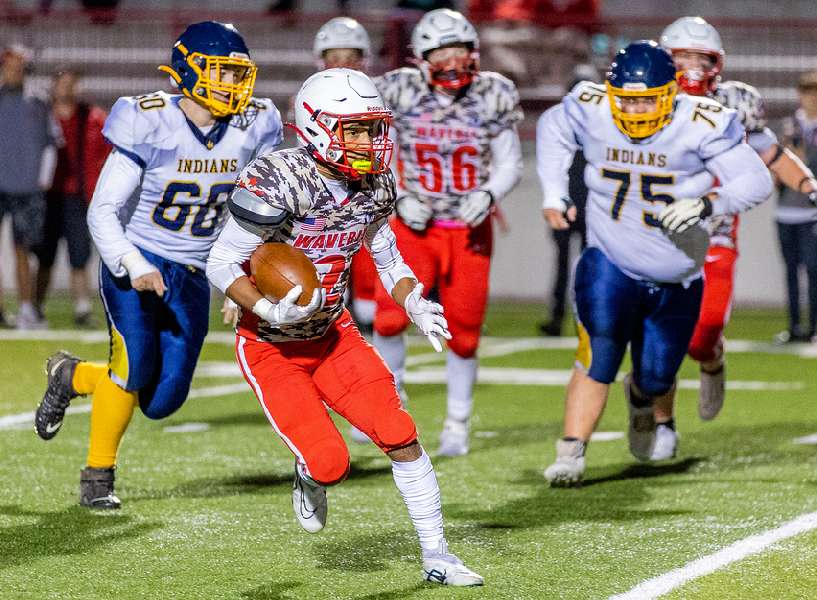 WAVERLY –  Waverly wasted little time lighting up the scoreboard, scoring on its first two offensive plays on its way to a 47-14 non-league football win over Cowanesque Valley here Friday night at Memorial Stadium.

“Each week they’re doing a little more and a little more,” said Leonard. “They kept a positive attitude. We’re very young and very green and we make some of those mistakes. As long as we keep going and keep trying, we’ll be OK.”

A key moment in the first half came when Waverly stopped CV at the 1-yard line on fourth-and-goal at the 3. Tomasso and Pipher hooked up moments later on their record-setting 99-yard TD pass.

Waverly added another first-half TD on a 10-yard Tomasso to junior Carter George, and led 20-0 at the intermission.

Things got lout of hand after the break.

A little later, Kaleb Bechy scored from 16 yards out after a big a 38-yard punt return by Pipher.

The Wolverines added a pick-six by senior Braeden Hills and a five-yard TD run by sophomore Payton Fravel.

CV, which moved the ball well in the first quarter before getting stuffed most of the game, got its offense in gear in the fourth.

Tomasso hit 12 of 17 passes for 267 yards and four TDs, and the Wolverines rushed for 109 yards, led by 35 yards and one TD by Bechy, and 31 yards by 8th-grader Bryce LaForest.
Pipher led Waverly with five catches for 179 yards and two TDs, while DeLill had three receptions for 49 yards and one TD, senior Isaiah Bretz had two catches for 23 yards, and George had two grabs for 16 yards and one TD.
“It’s an excellent Waverly team – very well-coached," said Leonard. "It was a pleasure to see them. I’ve coached against them before and they’re class acts.”

Waverly, now 4-0 and ranked seventh in the state in Class C, travels to Oneonta Saturday afternoon.