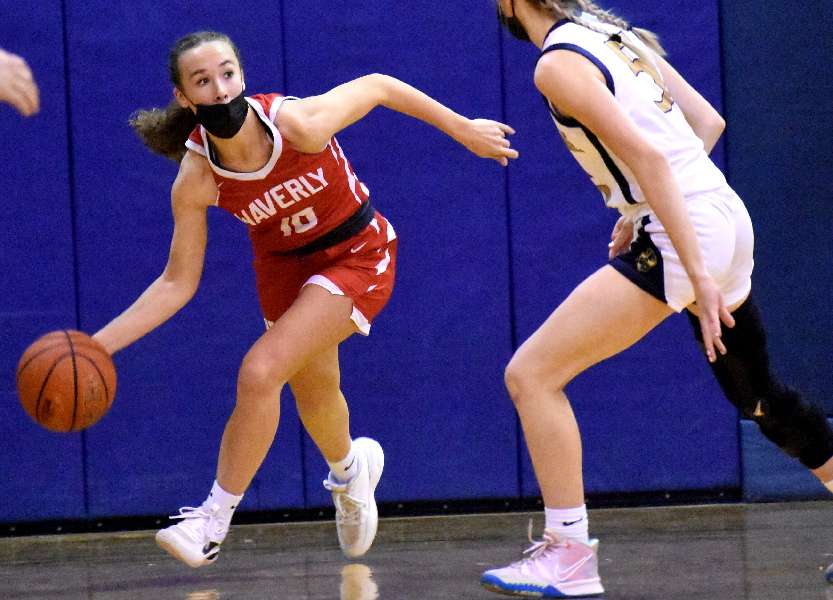 SOUTHPORT, N.Y. — Waverly bombed in six 3-pointers in the first quarter and raced out to a 22-point lead on its way to a 79-20 win over Notre Dame here Tuesday night in IAC South Large School girls basketball action.

Freshman Addison Westbrook canned a pair of 3-pointers and scored eight points in the first quarter, while sophomore Peyton Shaw knocked down a pair of 3-balls, senior Olivia Nittinger had one 3-pointer and five points, and sophomore Paige Robinson connected on a trey in a 26-4 blitz in the opening eight minutes.

Nittinger poured in 12 points, including a 3-pointer, while senior Lourden Benjamin and Addison Westbrook added four points apiece, and Robinson hit another 3-pointer to fuel a 23-2 barrage that put the Lady Wolverines ahead 44-6 at the halftime intermission.

Shaw scored six points in the third quarter, and Nittinger and junior Kennedy Westbrook each canned a 3-pointer and a pair of free throws in a 16-7 run that gave Waverly a 60-13 lead into the final eight minutes.

Waverly finished the game with 10 3-pointers.

Nittinger led Waverly with 24 points, including a trio of 3-pointers, while Addison Westbrook scored 14 points, Kennedy Westbrook had 13, Shaw added 12, and Benjamin and Robinson chipped in with eight points apiece.