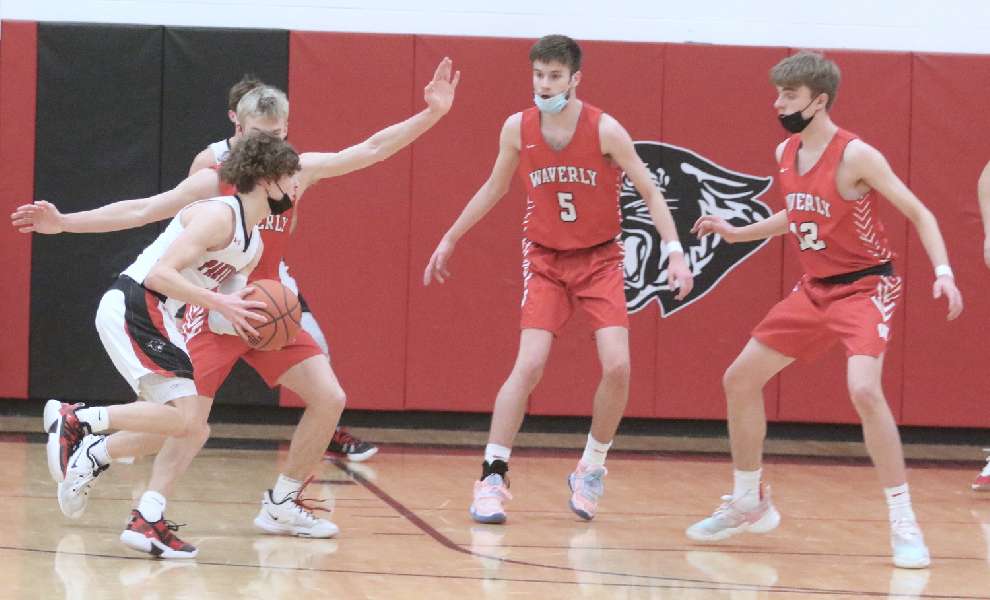 SPENCER — It may have been brutally cold outside, but Waverly was hot inside at the start of Saturday afternoon's IAC boys basketball against S-VE.

The Wolverines came out of the gate on fire, then turned away a couple of Panther comeback attempts to post a 64-53 victory.

"I thought we played an OK first half and then I think in the second half, with this basketball team, I think that they felt like if they just kind of went out there and ran around that we'd still win by 15," Waverly coach Lou Judson said. "And at the end of the day, as a head coach, you don't want that.

"We've had some games canceled. We haven't played in eight days. Not having our cheerleaders, being on the road. It just felt funny to me."

S-VE coach Cliff Pierce knew his team, which was missing one of its top scorers (Jayden Grube), was going up against a formidable foe and an opponent with a size advantage.

"Our kids are small, but they did do a nice job," he said. "We did a nice job hitting the boards today. I thought we played a really good game. We had probably our highest shooting percentage that we've had in quite a while and I'm really proud of them for their effort."

Waverly cranked out 23 points on the strength of five 3-pointers, putting the host in a 12-point hole after one quarter of play. Joey Tomasso accounted for three treys while Brennan Traub and Jay Pipher added one apiece. Tomasso would score 15 points in the period.

With the Wolverines up 24-14 in the second quarter, Tomasso connected for another three and Brennan Traub scored on a fast break off a turnover to give Waverly a 15-point advantage before the period was three minutes old.

Back-to-back baskets by Liam and Brennan Traub pushed the lead to 33-14. Following a bucket by S-VE's Logan Jewell, Liam Traub added another field goal to give the Wolverines a 35-16 cushion.

The Panthers would finish out the quarter with three points from Markus Brock, who also scored the first basket of the second half as Spencer began its first rally.

Aidan Swayze hit for a basket and a trey then, following a Tomasso basket, S-VE struck for five points to make it a 41-31 ball game.

Waverly responded with a Tomasso trey and a traditional 3-point play from Liam Traub for a 47-31 lead, but Brock went on a  7-0 run to close the gap to 47-38, the closest the score had been since the 3 1/2-minute mark of the first quarter.

"When Markus is hot, he really can take over a game offensively for us," Pierce said. "We are missing Jayden Grube, one of our other leading scorers. He was out on protocol, but we get him back next week, so that'll be nice to have. It's been since Dec. 4 that I've had my starting line-up, so it's going to be nice to have them all back."

"I just had a funny feeling that we were going to be challenged today. We were going to go through a wall today, which we did, but give credit to Spencer, because they played hard," Judson said. "They got themselves almost back in the basketball game and the Brock kid caught fire in the second half."

The Wolverines responded with a Tomasso trey and 3-point play in the final 33 seconds of the period to push the lead to 53-38 heading into the final stanza.

Brock banged out a pair of buckets to open the fourth quarter, but Davis Croft, Liam Traub and Isaiah Bretz combined for five points in 81 seconds to make it 58-41 with just over 4 1/2 minutes remaining in the game.

S-VE staged one final rally as Brock went on an 8-0 run which included a pair of threes, but Liam Traub countered with a pair of baskets to keep the Waverly advantage at double digits with 1:42 to go.

"I thought we did a better job of looking over the top of the defense and finding Liam over the top, and he played well in that fourth quarter for us," Judson said.

Tomasso, who connected on 6 of 9 shots from behind the 3-point arc led all scorers with a career-high 31 points, including six threes, to go along with three rebounds, three assists, three steals, and one blocked shot.

The Wolverines connected for eight 3-pointers on the day and picked up another 14 points at the free-throw line.

"They're a talented team," Pierce said. "I've said it before. Lou (Judson) does an amazing job with his kids. They all know how to play basketball. They work together really well, and they are great shooters. That's a testament to Lou and what he's developed down there in Waverly."

"This basketball team, we were on a five-game winning streak. We had been playing well," Judson said. "We got a little bit challenged today, which we haven't been challenged in three or four games, so it was good for us."

The Panthers made just four foul shots and connected for five treys, including two each from Brock and Pavel Jofre. Brock led S-VE with 30 points, Jofre had eight and Swayze scored seven.

"I just credit Spencer-Van Etten," Judson added. "They're down 18, 20 points a lot of that game and they came back, and they challenged us and it really got me to call a couple of timeouts late in the basketball game.

"But you know, in this league at the varsity level, it's always good to get a win on the road,” he added.