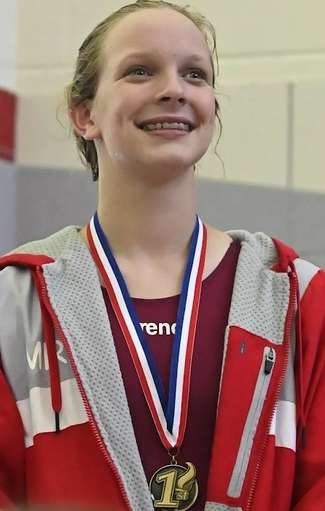 “We knew she was on the right path to a remarkable time when she had a split of 27.37 (seconds) in the backstroke leg of the opening event, the 200 Medley Relay,” said Waverly coach Amy Steck.

“She obliterated a 23-year-old record, what a night!,” added Steck.

Freshman Emma Vanderhoof was also a four-time winner for the Lady Wolverines, while freshmen Sophia Lee and Lizzy Robinson were triple-winners, and senior Sophia DeSisti were double-winners.

Kittle led a sweep in the 50-yard freestyle, clocking in at 25.7 seconds, while DeSisti was second in a personal-best time of 27.02 seconds, and senior Abby Knolles was third in 34.97 seconds.

In exhibition, Kittle, Vanderhoof, freshman Vada Harmon, and senior Josie VanDyke teamed to win the 400-yard freestyle in a time of 4:51.48, while the foursome of Knolles,freshman Brinn Cooney, and freshmen Sophie Williams and Sydney Rosenbloom finished second in 5:41.94.

Vanderhoof, DeSisti, Knolles and Robinson teamed to win the 200-yard freestyle relay in a time of 2:03.07, and the Waverly foursome of Lee, VanDyke, sophomore Brinn Cooney, and freshman Vada Harmon was second in 2:12.58.

In exhibition, VanDyke won the 1-meter diving competition with 189.9 points — ranking her fifth all-time in school history, and Knolles was second with a personal-best 149.8 points.

Waverly returns to action Sept. 10 when it hosts the Waverly Invitational.