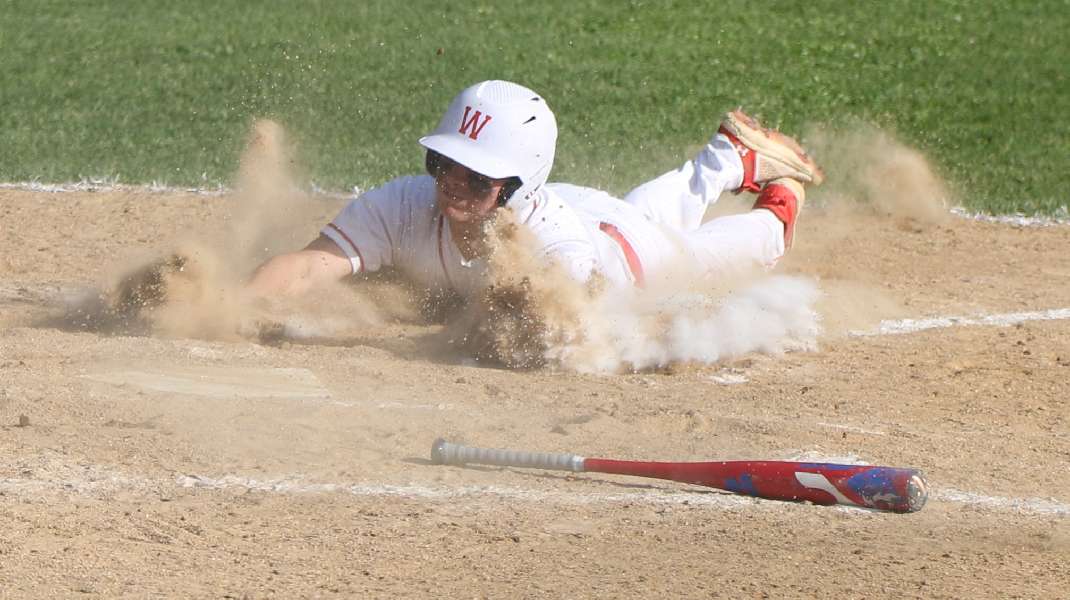 PIPHER, BEEMAN LEAD WAVERLY IN 11-1 WIN OVER CV, INTO FIRST CLASS B TITLE GAME SINCE 2013

WAVERLY — Sophomore Jay Pipher pitched a complete game, and junior Ty Beeman had a big day at the plate to lead Waverly to an 11-1 six-inning win over Chenango Valley here Wednesday afternoon in the semifinals of the Section IV, Class B baseball playoffs.

The Wolverines will face Oneonta Friday at 4 p.m. at Mirabito Stadium in Binghamton for the Class B title. It’s Waverly first title game appearance since 2013 when it beat the Yellowjackets for the program’s first-ever Section IV title.

“We had a goal tonight to win innings, and put up some crooked numbers,” he said. “When Ty (Beeman) hit the home run, and we won the first inning, you could see us start evolving.

“And the hustle Beeman showed on that play (his two-run triple), scoring on their mistake, and putting up the crooked number was really big.

“And Pipher on the mound was dominating,” noted McDuffee. “He was pounding the strike zone, and we played good defense behind him — no errors.

“CV struggled with Jay … he changed his speeds effectively,” he added. “He really did his job, and got us into the Section finals.”

After Pipher struck out the side in the top of the first inning, Beeman gave the Wolverines a 1-0 lead in the home half with a two-out solo home run over the left-center field fence.

CV’s first two batters in the second inning reached base — on a single and an error, but Pipher picked the runner of second base, then notched his fourth strikeout, and induced an infield pop out to escape unscathed.

Senior Brennan Traub reached base on an error to start the bottom of the third, and junior Bryce Bailey ripped a one-out single up the middle to put runners on first and second.

Beeman then pulled a 2-1 pitch down the left-field line for a two-run extra-base hit. He took third on the throw home, and hustled home on an overthrow at the plate to give Waverly a 4-0 lead.

Pipher re-ignited the rally with a base on balls, but was immediately replaced on the bast paths by sophomore Joey Tomasso by virtue of a fielder’s choice.

Tomasso took third on a hard-hit single to right field by senior Caden Hollywood. He scored on a balk when Hollywood broke for second as the CV pitcher went into his motion, but stopped and turned to throw to second, giving the Wolverines a 5-0 lead.

The Warriors used a hit batsman, a walk, and two singles to close the gap to 5-1, but Pipher limited the damage, and left the bases jammed.

“(Pipher) pitched out of a couple jams early — one with the bases loaded, and the other with guys on first and second,” said McDuffee. “He went at them … basically, he threw it over the plate and said ‘go get it;’  that’s what high school baseball should be — put it over the plate and hope the guys behind you make the plays.”

Beeman worked a base on balls to lead off the bottom of the fifth inning, moved to second on a wild pitch, and scored on an RBI single by Pipher to make it 6-1. Pipher later scored on a throwing error, extending the Wolverines’ lead to 7-1.

Pipher pitched around a two-out walk in the top of the sixth inning, then the Wolverines closed out the game via the 10-run “mercy rule” with four runs in the home half of the frame.

Bailey’s two-RBI single was the key hit in the rally, while senior Jack Barrett knocked in a run with a fielder’s choice grounder, and Damien McConnell finished the game with a walk-off RBI single to make it 11-1.

Pipher earned the win, allowing one run on three hits, while striking out nine and walking two in six innings of work.

Traub singled twice and scored one run in the win, while Hollywood and McConnell each singled and drove in one run, Barrett had one RBI, and senior Thomas Hand and Tomasso each scored one run.

The Wolverines improve to 12-9 on the season. They lost seven of their final eight regular-season games, but those losses were Class 6A Williamsport, South Williamsport (playing in District 4, Class 2A finals Saturday), Athens, Sayre, Notre Dame twice (in Class C finals Friday), and Horseheads (Section IV, Class AA champs). Their only win was against Notre Dame.

McDuffee says their brutal schedule during the second half of the season is paying dividends.

“I think it’s played a really big part in our postseason success.

“At one point, I was worried,” said McDuffee. “We were losing, and I didn’t want to get into that rut — you can’t accept losses.

“But now, we’re seeing quality at-bats … we saw some really good pitching this season, especially from those team down in (District 4) Pennsylvania, and that’s helped us a ton,” he noted. “I think these guys are locked in and focused, thinking opposite field, and barreling the ball.

“I think the strong schedule was a huge help for us,” added McDuffee. “I think that Horseheads game was a springboard for us. Even though we lost in nine innings, I think that was the game that launched us.”