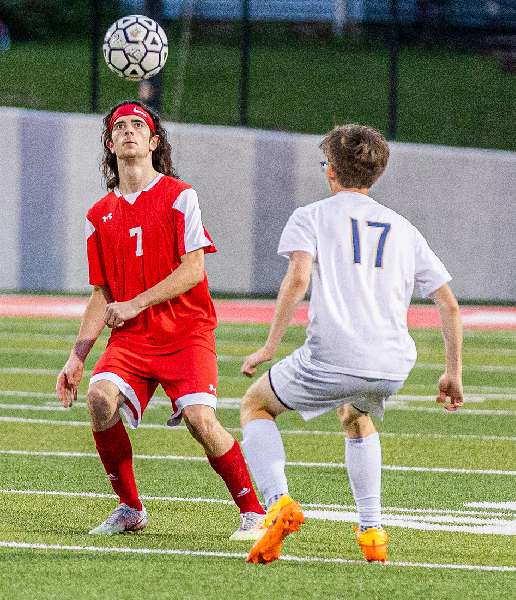 “I am really happy with how the boys played tonight,” said Waverly coach Eric Ryck. “Their awareness, their aggressiveness, and their decision-making was all very good tonight.

“We came out fast and Ethan Gorsline was able to take advantage of an opportunity and find the back of the net,” noted Ryck. “We were trying to force the ball a bit too much in the first half, and having trouble dealing with the wet conditions a bit.

“In the last two minutes of the first half, the boys were able to calm down a bit and and create better offensive opportunities, and we were able to capitalize on a Notre Dame handball in the box that resulted in a penalty kick,” continued Ryck.

“The second half is where it really opened up for us tonight,” added Ryck. “The boys started playing more simply and not forcing, coupled with some good aggressive play from our wing players, we were able to create a lot of opportunities for our forward attackers to run on balls played in behind, which gave us some high percentage shots-on-goal.”

Gorsline scored his first varsity goal two minutes into the contest to give the Wolverines a 1-0 lead, but the Crusaders answered with a goal by Pat McCarthy to tie the game at 1-1.

Schillmoeller converted on a penalty kick to give the Wolverines a 2-1 lead, then added two more goals in the second half to complete his hat trick.

Alex Emanuel also scored a goal for the Wolverines.

Waverly had a 14-2 advantage in shots-on-goal, and both teams had two corner kicks.

Aiden Doherty had one save in net for Waverly, while Jackson Potter recorded nine for Notre Dame.