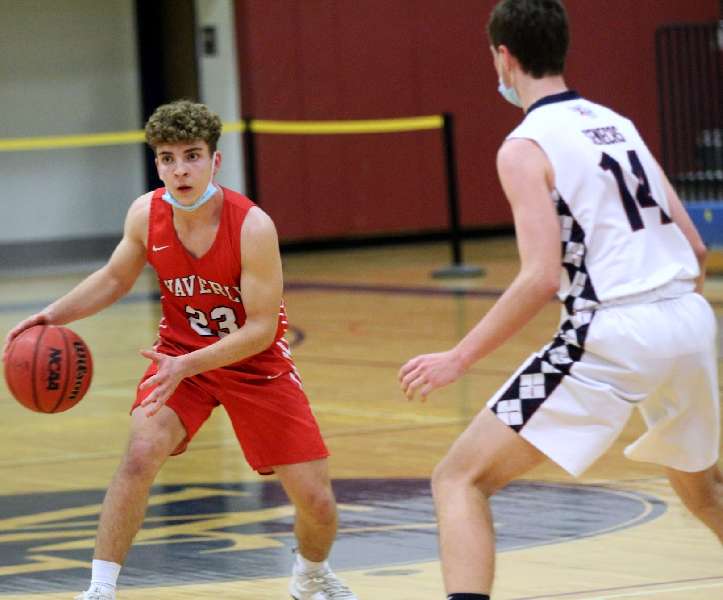 WATKINS GLEN — After a back-and-forth first half, Watkins Glen took the lead early in the second half, and held off Waverly in a 54-48 win to clinch a share of the IAC South Large School Division boys basketball title.

Watkins Glen can clinch the division title with a home win over Newark Valley Tuesday.

“We played a pretty solid first half,” he noted. “We came out in the third quarter, and played very poorly, then played a very inspired fourth quarter.

“We got within two points a couple times, but we didn’t make the plays down the stretch that you need to make against a good basketball team,” Judson added.

Judson said the Wolverines had their chances.

“It was definitely a game of missed opportunities,” noted Judson. “I don’t think Watkins Glen played all that well tonight. I think they were ripe for the taking.

“I’m proud of the guys,” added Judson. “We gave ourselves a chance to win the basketball game late in the game, we just didn’t come through.”

Adam Pastore and Cam Holland scored seven points apiece in the first quarter to help the Senecas to a 19-11 lead after the first eight minutes.

Pastore, who hadn’t played in a game since Jan.2 due to an ankle injury, added five points early in the second quarter, including a 3-pointer, so Judson decided to make a change.

“Adam Pastore played tonight, and he hasn’t played in five weeks … it was his first game back, and he really didn’t miss a beat in that first half.

“We had trouble guarding him in the first quarter in the man-to-man, so I switched up our defense and went to a match-up zone in the second quarter,” said Judson. “It got them out of rhythm a little bit, and we were able to get back into the game, and took the lead.

“Then they started figuring it out, so we switched back to man-to-man in the second half,” added Judson.

Tomasso, who scored seven points in the first quarter, scored seven more in the second quarter, while senior Liam Traub canned a 3-pointer and two free throws, and senior Brady Blauvelt added a 3-pointer in a 19-10 run that gave the Wolverines a 30-29 lead at the half.

The Senecas opened the second half with an 8-4 spurt to take a 37-34 lead with 3:40 remaining in the third quarter, then extend their lead to 41-34 entering the final eight minutes.

Waverly closed the gap to 44-42 with 3:45 remaining in the game, and again pulled within two points, at 50-48, with 17 seconds remaining, but Watkins Glen sealed the win with four free throws.

Judson said his team’s inability to keep the Senecas off the boards was a key in the loss.

“The key tonight was our lack of rebounding,” said Judson. “I don’t know how many offensive rebounds (Watkins Glen) had tonight, but it had to be more than 20.

“It seemed like every time they shot the basketball, they were getting second and third opportunities,” added Judson. “You can’t do that against good basketball teams, especially when you’re trying to win a division championship.”

Pastors led Watkins Glen with 18 points, while Mitchell Pike had 14 points, including a trio of 3-pointers, and Holland added 11 points.

Waverly, now 12-5, returns to action Tuesday when it hosts Thomas A. Edison.