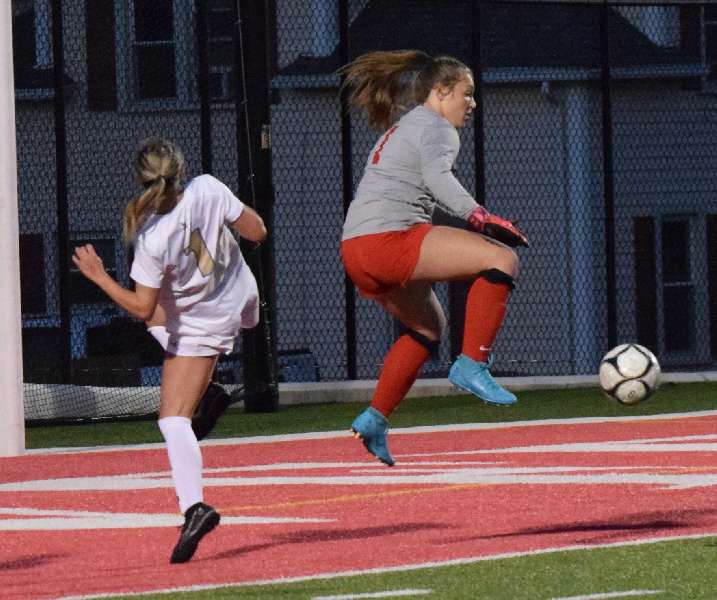 “We were playing as if we were intimidated and scared … we made a lot of mistakes the first half,” she noted.

“At halftime, we reminded the girls we worked on these exact skills at practice (Wednesday),” added Hogan.

After more than 50 minutes of scoreless soccer, sophomore Addison Westbrook, off a feed from sophomore Kiley Stillman, scored from the right wing on a shot that went under a diving Notre Dame keeper Shannon Maloney at the near post.

About 10 minutes later, 8th-grader Lauren Gorsline, off a feed from Addison Westbrook, chipped a shot from inside the 18 under the bar to make it 2-0.

“Addison Westbrook had a phenomenal game,” said Hogan. “She was doing an incredible job supporting the midfielder and then turning to make a run down the field.

“(Lauren) was initially on midfield, but totally changed the game when we were able to move her up top,” added Hogan. “She brought a new level of energy and was able to capitalize with a fantastic shot.”

Waverly had a 10-6 edge in shots-on-goal, and both teams had two corner kicks.

Freshman Claire Clonch had six saves in net for Waverly, and Maloney had eight for the Lady Crusaders.

“Claire (Clonch) was tested a bit more today, but she and Kennedy (Westbrook) worked so well with communicating that even if someone was able to stay with Kennedy — and not many players can, Claire was right there to support her,” said Hogan.

“And, Paige Robinson and Olivia Robinson were unbeatable,” noted Hogan. “Paige has gotten so much more confident.

“The defense was heavily relied upon tonight,” she added. “They were invaluable.”