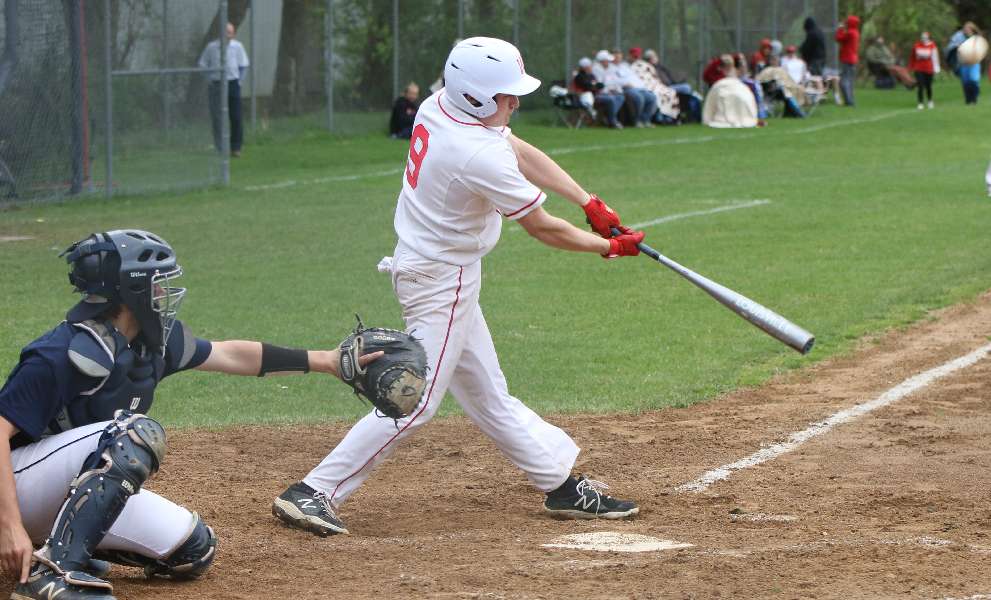 WAVERLY — After a loss at Notre Dame Monday, Waverly’s only hope of winning the IAC South Large School Division baseball title was to beat the Crusaders twice.

The Wolverines pulled even in the division title chase Wednesday with a 7-0 win. The longtime rivals will square off again Friday in a winner-take-all match-up.

“We had our backs against the wall, and we responded,” said Waverly coach Kyle McDuffee. “The way we responded what what we were hoping for, it was the type of response we needed.”

The game was tied at 0-0 until sophomore Joey Tomasso ripped a two-out, two-RBI single into left field in the home half of the fifth inning.

“Tomasso has been barreling the ball the last three games,” said McDuffee. “He’s just had no luck, he’s been hitting it right at everybody — that was a huge spot in the game.”

Tomasso, who had been batting sixth in the line-up, was in the fifth spot Wednesday.

“We did a little shake-up in the line-up … coaches have those gut feelings,” said McDuffee. “We made some changes, and it paid off.”

Tomasso’s game-winning hit was set up by reliever Jay Pipher, who pitched out of jams in the fourth and fifth innings.

In the fourth, Waverly starter Caden Hollywood hit the first batter of the inning, then walked the next.

After a sacrifice bunt moved the runners over, Pipher was called on to relieve. He walked the first batter to load the bases, then fanned the next two to maintain the scoreless tie.

In the top of the fifth, issued a one-out walk, then was tagged for a double by Steven Gough to put runners on the second and third. Once again, however, Pipher struck out the first two batters — the first when catcher Ty Beeman hauled in a foul tip on the third strike.

“I thought Caden Hollywood did a good job … he left the game without giving up any runs,” said McDuffee.

“(Jay) Pipher came in and really slammed the door on that rally,” added McDuffee. “A base hit or a flyball could have turned the direction of the game.”

Pipher earned the win with 2 2/3 innings of two-hit relief. He fanned seven and walked two.

“(Pipher) has that gritty passion for the game, and when he’s on the mound he’s really focused,” said McDuffee.

“And, he’s really worked hard in the offseason, and that has shown … every time he gets on the mound, he just gets better and better,” added McDuffee.

Hollywood allowed just one hit in 3 1/3 innings, but walked six and struck out three. Beeman struck out one and walked one in a scoreless inning of relief.

Both teams missed opportunities to score in the early-going.

Notre Dame loaded the bases with two outs in the top of the first inning, but Tomasso hauled in a pop out at shortstop to end the threat.

Waverly had runners on first and second with one out, but left them stranded there.

The Crusaders also left two runners on in the second inning.

After Pipher escaped the jam in the top of the fifth, senior Jack Barrett worked a walk to lead off the home half of the fifth.

Senior Thomas Hand then ripped a double to the left-center field gap to put runners on second base. After hitting Pipher with a pitch, Gough notched two strikeouts and was the verge of getting out of the inning.

However, Tomasso ripped a 2-0 pitch into the hole between short and third base to give the Wolverines a 2-0 lead.

After Hollywood was hit by a pitch to re-load the bases, senior Brennan Traub singled up the middle to drive home one runner, and a misplay in center field allowed another runner to score to make it 4-0.

A throwing error moments later allowed to more Wolverines to score to extend the lead to 6-0.

Waverly tacked on a run in the sixth inning on a lead-off triple by Hand, and an RBI groundout off the bat of Pipher.

Hand tripled and doubled and scored two runs, while senior Brennan Traub was 2-for-2 with a run scored, and an RBI, and junior Bryce Bailey doubled and singled to pace Waverly’s seven-hit attack.

Gough was tagged with the loss, allowing six runs — three earned — on five hits, while striking out nine and walking three in five innings of work.

Waverly and Notre Dame squares off at 5 p.m. Friday at Notre Dame with the division title on the line.

Stewart, who earned the win Monday, will likely pitch for the Crusaders. Stewart is 5-0 on the season with a 0.18 ERA. He has fanned 90 and allowed just nine hits in 38 2/3 innings.

“He’s the real deal, there’s no doubt about it,” said McDuffee. “He’s a complete pitcher, he’s not a thrower.

“All year long, we’ve lined our team up against some of the best pitching in the area … in the Pa. area against Montoursville, Williamsport, and South Williamsport, as well as Corning and Sayre.

“We’ve lined our guys up against the best pitching we could for this moment,” McDuffee added. “Let’s see how we respond.”