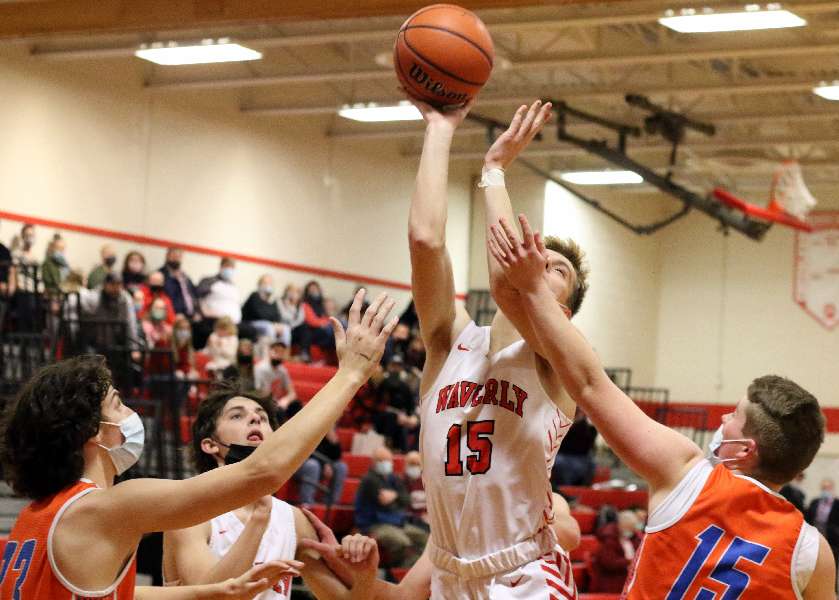 WAVERLY BOUNCES BACK WITH LOPSIDED WIN OVER EDISON

WAVERLY — Waverly raced out to a double-digit lead midway through the first quarter, and cruised to a 69-16 win over Thomas A. Edison here Tuesday night in IAC South Large School Division boys basketball action.

The win comes just 24 hours after the Wolverines were eliminated from division title contention with a 54-48 loss at Watkins Glen.

“You never know how you’re going to play after an emotional loss like (Monday) night, but the kids played well,” said Waverly coach Lou Judson. “I was pleased with how we came out and played tonight.

“Hopefully, they understand there’s a lot more to be played for than a division title,” Judson added.

“It was a very good start on Senior Night,” said Judson. “We were able to get Tyler Talada a start, and a lot of minutes for Declan Murphy.

“The guys were sharing the basketball, and getting out in transition. And, they were having fun,” he added.

A pair of free throws by George Smith put Edison on the board with 3:24 remaining in the first quarter, and buckets by Evan Bush and Tyler Belloma closed the gap to 16-6, but five points by sophomore Joey Tomasso in the final minute, including a 3-pointer with 10 seconds remaining gave the Wolverines a 21-6 lead after the first eight minutes.

Tomasso knocked down another 3-pointer and scored seven points in the second quarter, while Liam Traub scored six points, senior Brady Blauvelt added four points, and Brennan Traub and senior Tyler Talada each knocked down 3-pointers to fuel a 23-2 blitz that push Waverly’s lead to 44-8 at the halftime intermission.

“I was pleased with our defense,” said Judson.

“I’ve been experimenting with a 1-3-1 all year long, maybe against some lesser competition,” he noted. “I’ve really liked it when we put it in, and in practice, but I’ve never trusted it against good teams.

“Maybe it will be in the back of my mind, and we can use it in Sectional play, because we’re long and athletic,” added Judson.

Waverly, now 13-5, hosts Chenango Forks Friday night in what is the final game on the schedule. However, Judson said he expects to add a game for next week.