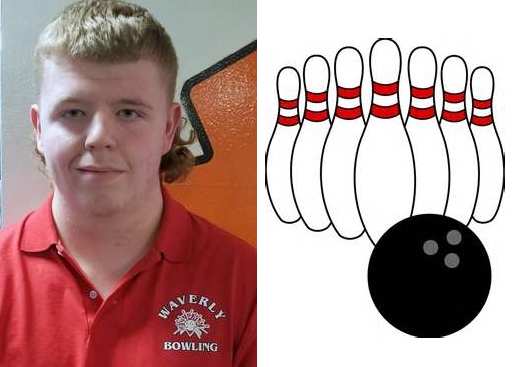 WAVERLY — Junior Zach Vanderpool paced a balanced Waverly line-up in a sweep of Odessa-Montour here Tuesday afternoon in IAC bowling action, while the Lady Wolverines rallied to salvage a split.

Sophomore Carter Hayes shot a 541, including a 202, in the sweep, while junior Ashton Pritchard had a 525, freshman Dom Wood added a 516, and senior Cody Blackwell tacked on a 421.

GIRLS
Waverly 2, O-M 0
Odessa-Montour won the first two games, but Waverly rallied to win the third game and the total-pinfall point to salvage a 2-2 tie.

Sophomore Rachel Houseknecht shot a 622 series on games of 222, 214, and 186 to lead Waverly, while junior Victoria Houseknecht rolled a 547.

Junior Shantilly Decker had a 438 series for the Lady Wolverines, while freshman Serenity Conklin added a 404, and 7th-grader Emily Houseknecht takes on a 278.

Waverly closes out the regular season Wednesday at home against SVEC.