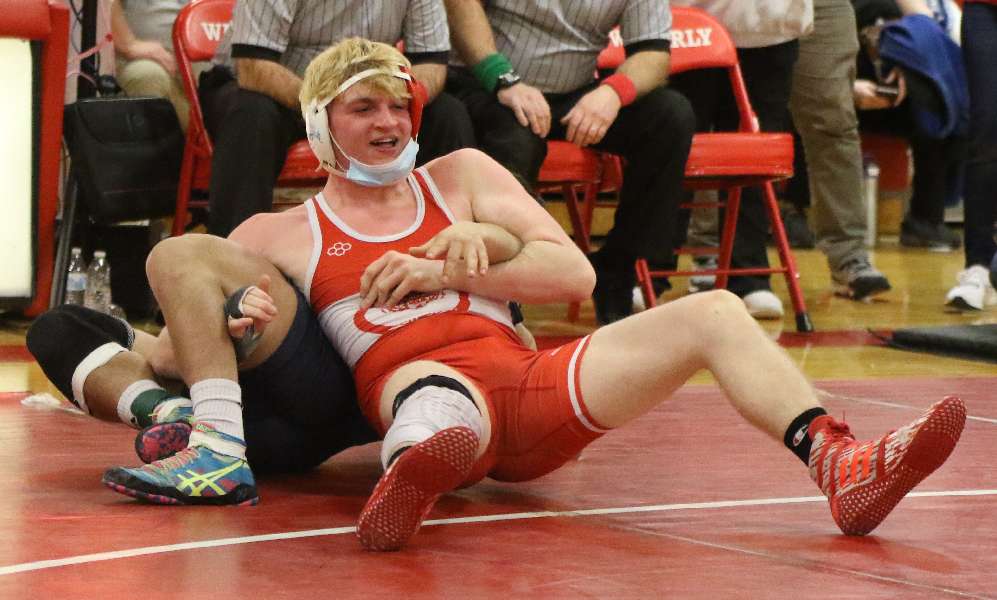 WAVERLY — Waverly crowned two champions, and had two runners-up in a second-place finish here Saturday at the IAC wrestling championships.

“I’d give our performance a B-plus / A-minus, somewhere around there,” said Waverly coach Devan Witman. “There are definitely some matches I feel we should have won, but there were some guys who really stepped up, and performed really well.

“Overall as a team, I don’t think we’re quite where we want to be, but we’re definitely getting there,” added Witman. “We’re not there yet, but we’re headed in the right direction.”

Tioga, the state’s top-ranked Division 2 team, amassed 222 team points to win the team title, while Waverly tallied 138, Marathon was third with 135, SVEC was fourth with 115.5 points, and Groton was fifth with 98.

Freshman Hills wins 285-pound title
Kam Hills, ranked 12th in the state at 285 pounds, pinned sixth-seeded Seth Northrop of Newark Valley  in 1:19 in the quarterfinals, then decked second-seeded Caleb Georgia of Lansing in 51 seconds in the semifinals.

After a scoreless first period in his championship match-up against top-seeded Logan Jamison of Marathon, who is ranked 10th in the state, Hills turned Jamison to his back for a fall at 2:32.

“(Jamison) has been wrecking people in the IAC and Section IV,” said Witman. “That could be the match-up for the Section IV title, too,

“What Kam does well is his positioning. He never gets out of position,” noted Witman. “He never puts himself in danger on his shots, and he’s constantly pushing forward.

“The second thing is he’s gotten into great shape for a heavyweight,” continued Witman. “In that second period, he was dead-lifting (Jamison’s leg), and he was doing it like it was nothing. For a heavyweight to do that in the second period is a huge feat, and it really shows what kind of shape he’s in.”

Tedesco wins 172-pound title
Tedesco opened his march to the top step of the 172-pound podium with a 58-second pin of Dryden’s Hunter Covington in the quarterfinals.

In one of the “matches of the day,” Tedesco survived a battle with third-seeded Trent Browne of Tioga, winning a 9-7 decision. Both wrestlers fought off their back during the bout.

In the finals, Tedesco scored a five-point move midway through the first period on his way to a 9-2 win over top-seeded Trevor Hurlbert of Marathon to avenge a loss by first-period fall at the Windsor Christmas Tournament.

“Gage (Tedesco) wanted that one bad,” said Witman. “He knows he didn’t wrestle well the first time they wrestled.

“Gage has been coming on as of late,” noted Witman. “We’ve restricted what we want him to do on the mat, which has really helped. Now, he’s focused on those three or four takedowns he can hit. He’s wrestling really well right now.

“He was trying to hit 100 things earlier in the season, and it just wasn’t working,” added Witman. “Now he’s hitting his elbow passes, his slide-bys, and his counter shots … this is the best I’ve ever seen him.”

Stotler falls to top seed in 132-pound finals
Stotler, ranked 13th in the state, opened with a pin of O-M / WG’s Brandon Davis in 1:27 in the round-of-16, then decked Tioga’s Mike Graham in 1:13 in the quarterfinals.

Stotler advanced to the finals with a 44-second fall of third-seeded Tim Morehouse of Marathon in the semifinals.

Stotler scored a takedown in the opening second of the championship match against top-seeded Caden Bellis of Tioga, who is ranked third in the state, but Bellis reversed, caught him in a cradle and scored a fall in 1:30.

“Even against Bellis, he came out ready to wrestle. He came out firing and got that takedown,” said Witman. “I think that gave him some confidence going forward, and I think it will continue to give him confidence — just that one takedown, we can build off it.

“Most likely that will be the Section final,” added Witman. “We’ll go back and see what we can adjust, and see how much we can close that gap.”

Eighth-grader Beeman, Kimble finish 2-3 at 189 pounds
Troy Beeman opened with a pin of third-seeded Zach McCall of Whitney Point in 1:12 in the quarterfinals, then forged a 12-0 major decision against second-seeded Seth Parker of Moravia in the semifinals.

In the finals, top-seeded Devin Beach of SVEC, ranked third in the state, built a 15-1 lead after the first two minutes, then scored a takedown into a fall at 2:29.

“Troy Beeman is wrestling really well,” said Witman. “He’s down a weight class from where he was at the beginning of the year … because of that work he’s in tremendous shape and give 110 percent for three periods.”

Kimble was knocked into the consolation bracket immediately, losing by first-period fall to Beach in the opening round.

Kimble responded with four straight pins, including a trio of first-period falls, to finish third.

Kimble opened the consolation bracket with a pin of Dryden’s Joe Kring in 1:20, then decked McCall in 1:18 seconds in the “blood round.”

In the consolation semifinals, Kimble pinned fourth-seeded Brody Williams of O-M / WG in 2:01 to advance to the third-place match, where he pinned Parker in 45 seconds.

“Andrew Kimble was definitely a big surprise today with how well he wrestled. He was shooting high-crotches that I’ve never seen him hit before.

“After the (Devin) Beach match, I don’t think he went outside the second period, which is a huge testament to him,” added Witman.

Beeman finishes third at 215 pounds
Ty Beeman, ranked eighth in the state, opened with a pin of Edison’s Alex Wheeler in 1:21 in the round-of-16, then decked SVEC’s Ezekiel Foster in 1:50 in the quarterfinals.

Ty Beeman led third-seeded Donovan Mitchell, ranked 15th in the state, 2-0 after the first two minutes, but Mitchell locked in a cradle early in the second period for a fall at 2:49.

Ty Beeman bounced back in the consolation semifinals with a 3-0 win over Tioga’s Josh Snell, then decked sixth-seeded Nate Demmer of Newark Valley in 2:36 in the third-place match.

“Ty (Beeman) lost a heartbreaker,” said Witman. “That’s the second time we’ve seen (Mitchell), and we’ll probably see him again in the Section final. Those are the matches that are heartbreaking now, but the ones we need in a couple weeks.”

Hills finishes third at 160 pounds
Hills started his day with a loss via first-period fall to third-seeded Kaiden Pado of Newark Valley in the opening round, but bounced back with four falls of his own to finish third at 160 pounds.

After a 47-second pin of Lansing’s Colin Larratt in the “blood round,” Braeden Hills decked fourth-seeded Jeremy Miller of O-M / WG in the consolation semifinals.

In the third-place match, Hills trailed Dryden’s Chris Combs, 4-1, and began the second period on the bottom. He went head hunting and flipped Combs to his back for a fall at 1:23.

“He didn’t look like himself in his loss,” said Witman. “I think if he had the chance to wrestle that again, he would win that match.

“He took my critiques to heart, and he came back strong,” noted Witman. “He really got after it, and pinned his way back to third.”

Courtney finishes third at 126 pounds
Courtney dropped a 7-0 decision to Marathon’s Anthony Neville in the opening round, but bounced back with four straight wins in wrestlebacks to claim third place.

Courtney opened his consolation bracket march with a pin of fourth-seeded Jordon Taylor of Edison, then pinned his teammate Payton Fravel in 52 seconds.

In the consolation semifinals, Courtney decked Tioga’s Emily Sindoni in 2:40.

“(Josh) came out ready to wrestle,” said Witman. “He’s another workhorse. He’s going to put in six hard minutes, and wear people down.

“He didn’t look 100 percent right in that first match, like he does in the practice room,” noted Witman. ”He took that loss, then four wins later he takes third place, and he has some points in the IAC for next year.”

Freshman Besecker places fifth at 118 pounds
After losing by first-period fall to second-seeded Logan Bellis of Tioga in the quarterfinals, Besecker bounced back in the “blood round” with a pin of sixth-seeded Brett Deuel of Groton in 2:01.

In the consolation semifinals, Besecker lost via first-period fall to fourth-seeded Kris Willard of Groton.

Besecker was awarded fifth-place via the “five-match” rule as his opponents, fifth-seeded Anthony Fiero of Thomas A. Edison had already wrestled the maximum of five matches on the day.

Other wrestlers for Waverly
•  Fravel was 1-2 at 126, with his lone win a pin of teammate freshman Hayden Larson in 1:52 in his first wrestleback match.

• Freshman Mackenzie Laforest was 1-2 at 215 pounds. She opened the day with a 7-4 win over Dryden’s Aaron Thompson, but lost her next two matches.