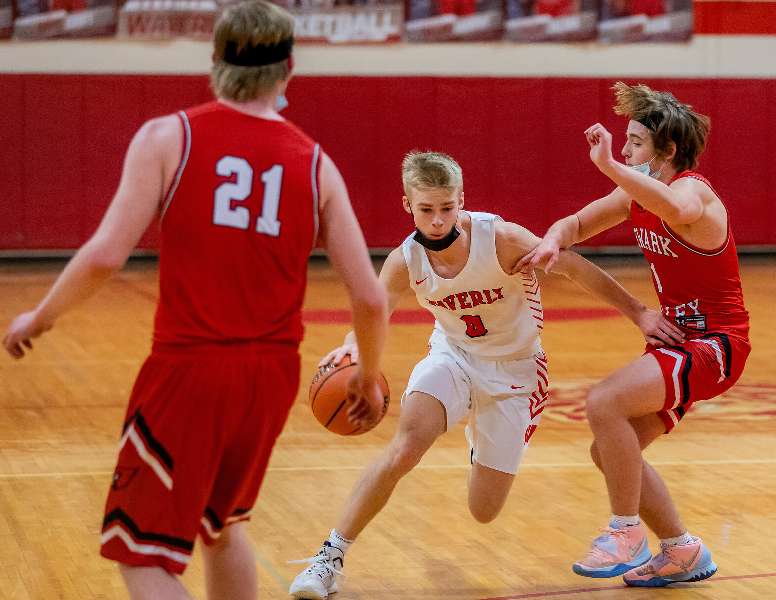 WAVERLY — For the second game in a row, Waverly’s defense created scoring opportunities, and the Wolverines cashed in on the majority of them in a 79-32 win over Newark Valley here Wednesday night in IAC South Large School boys basketball action.

“I thought we did a good job pressuring their guards, and I thought my guards played well, especially in the second half. and did a good job at being at the forefront of our defense, so our wings could overplay,” said Waverly coach Lou Judson.

“It was very similar to the Edison game (Monday night), where we got out in transition and ran, and made some good decisions.

“We’ve been focused on turning the ball over, and we only had seven turnovers in the game,” added Judson.

The Wolverines’ advantage could have been even bigger, but they made just 4 of 10 free-throw attempts in the first eight minutes.

Brennan Traub scored eight points in the second quarter, and Croft added four as Waverly added four points to its lead, taking a 40-21 lead into the halftime locker room.

Tomasso canned a pair of 3-pointers and pumped in 12 points in the third quarter, and junior Isaiah Bretz and Brennan Traub each scored four points to fuel a 27-6 blitz that gave the Wolverines a 67-27 lead entering the final eight minutes.

“I’ve been pleased with how Isaiah Bretz is starting to buy in. He was a late addition to our team, and he’s starting to figure things out,” noted Judson. “And, we’ve playing Nate DeLill a lot at the small forward spot, and he’s been playing well.

“I think these games are going  to help us down the road,” added Judson. “It allows these guys to get a taste of it, and make them understand they’re as big a part of our success as anyone else.”