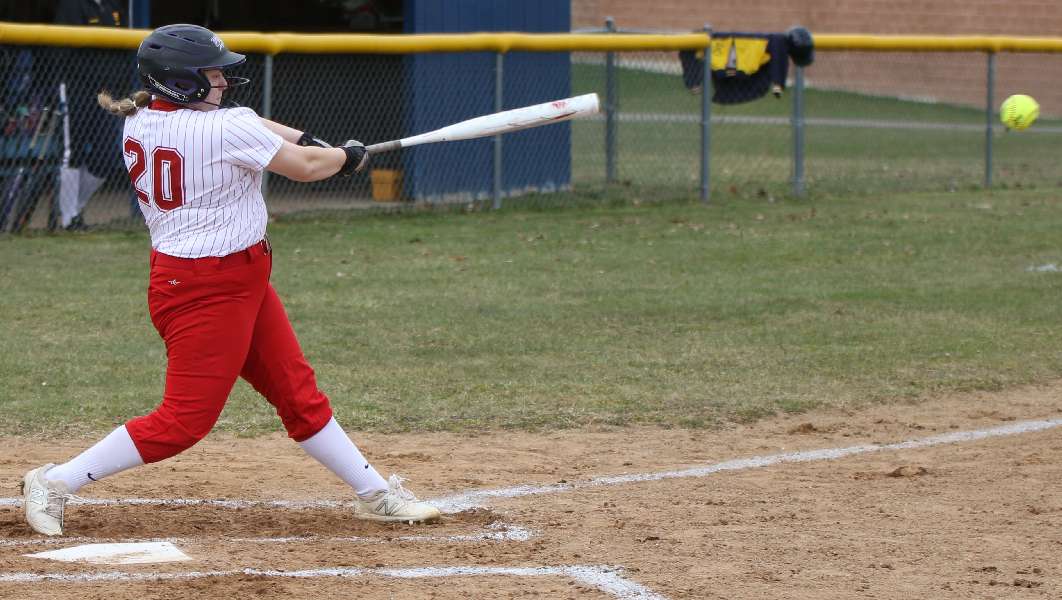 TIOGA CENTER — Senior Austyn Vance scored the go-ahead run in the bottom of the fifth inning to give Tioga the lead for good in a wild, 13-12, win over Waverly here Monday afternoon in IAC softball action.

Waverly led 4-0 after one-half inning, and 7-3 after 1 1/2 innings, but Tioga rallied to take an 8-7 lead after two innings. The next few innings were a back-and-forth affair.

Senior Bella Romano ripped an RBI triple to the right-field fence in the top of the first inning to give the Lady Wolverines a quick 2-0 lead. With one out, Romano trotted home on a line drive RBI single by freshman Olivia Robinson, who scored on a wild pitch with two outs to make it 4-0.

After a brief stoppage, Robinson resumed pitching and retired the first batter she faced, but walked senior Julia Bellis and gave up a single to junior Felicia Lantz to load the bases.

A walk to Vance forced home one run, and senior Alissa Hine capped the rally with a bloop single to left-center field to close the gap to 4-3.

Romano ripped a two-run double down the left-field line to make it 6-3 in the top of the second, and later scored on a sacrifice fly by Robinson to extend the lead to 7-3.

Foley, who walked to lead off the bottom of the second, scored on a sacrifice fly into short right field by Thetga to trim the Waverly lead to 7-4.

With two outs, freshman Erin Luther reached on an error, Bellis sliced a line-drive RBI single to make it 7-5, then scored on an RBI single by Lantz to close the gap to 7-6.

After a walk to Vance, and a single by Hine loaded the bases, senior Molly Bombard grounded a two-RBI double to left field to give Tioga an 8-7 lead.

Tioga hit three straight singles — by 8th-grader Raeann Feeko, Thetga, and sophomore Megan Shumway — to lead off the bottom of the fourth inning, but Robinson escaped the inning without allowing a run.

Waverly loaded the bases with one out in the top of the fourth inning, then tied the game on a bases-loaded walk to freshman Bri Cooney. With two outs, sophomore Lea VanAllen grounded an RBI single into left field to give Waverly a 9-8 lead.

Tioga answered immediately with Foley slapping a single to tie the game at 9-9, and Thetga delivering a two-run single to give the Lady Tigers an 11-9 lead.

Waverly also answered immediately, with Robinson helping her own cause with a two-run double to plate sophomore Peyton Shaw and senior Aubrey Ennis, who had both reached via base on balls, to tie the game at 11-11.

Vance ripped a line-drive one-out triple in the home half of the fifth, and scored moments later on an RBI groundout off the bat of Hine to make it 12-11.

Hine, in her first full inning of relief, pitched around a pair of singles to keep Waverly off the board for just the second time in the game.

In the bottom of the sixth, Thetga added an insurance run with a blast over the center field fence to make it 13-11.

Ennis ripped a one-out RBI double in the top of the seventh to close the gap to 13-12, but Hine retired the next two batters to preserve the win.

Hine earned the win for Tioga, allowing two runs on four hits, while striking out three and walking two in 2 2/3 innings.

Senior Michael Lauper singled and scored two runs for the Lady Wolverines, while Cooney singled and drove in one run, and Shaw scored four runs.

Tioga (1-0) returns to action Wednesday at Newfield, while Waverly (0-1) is at Newark Valley.