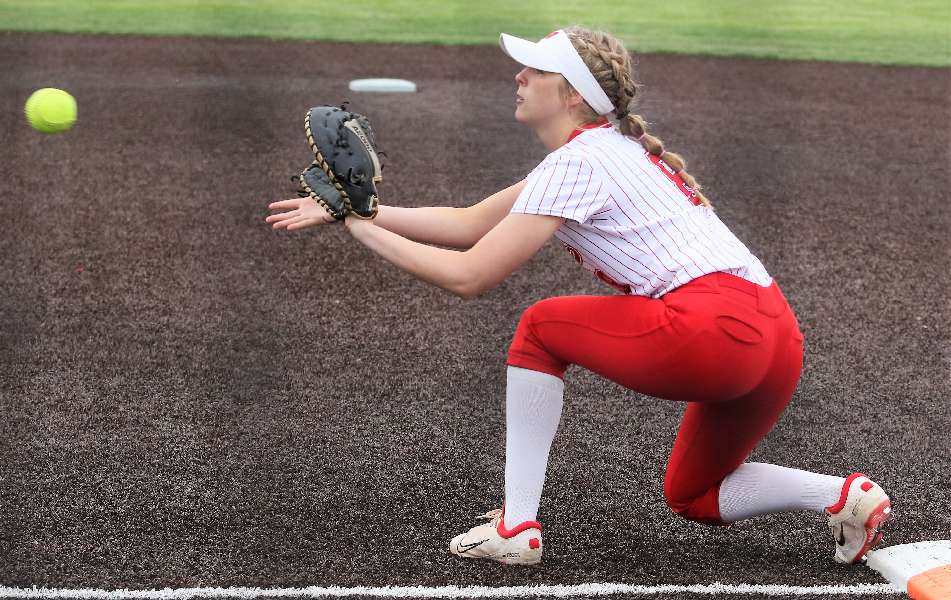 OWEGO — Owego scored three runs in the bottom of the sixth inning to secure a 5-1 victory over fifth-seeded Waverly in a Section IV Class B girls softball quarterfinal here Monday.

Up to that point, it was an evenly played duel between the two teams, however, it could have been a different scenario as the Wolverines loaded the bases in the first two innings only to come away empty handed.

Lauper led off the game with a base on balls, Peyton Shaw laid down a sacrifice bunt, Bella Romano walked and Aubrey Ennis singled, loading the bases. Gilbert would strike out the side to end any threat.

In the home half of the first, Dalton led off with a walk and would advance to third before scoring on a passed ball.

Waverly stacked the sacks again in the second when Brinn Cooney reached on an error, Lourden Benjamin was hit by a pitch and Lauper walked. Gilbert again retired the side to get out of trouble, this time on a pop out and a strikeout.

"That was big for us and Lauren Gilbert come up big for us at the end of both of those innings to strike out some kids to end that whole rally that they had," Doane said. "First inning, I thought it was nerves and I'm pretty sure that's what it really was. Second ending, I was a little bit disappointed because we were back in the same position, but we fought through. Thankfully, we were able to shut the door on them and Gilbert came through and put the hammer on them."

Sophia Palladino took one for the team and Natalie Donovan walked in the bottom of the second, but Lauper induced a pair of pop outs to end the inning.

Owego threatened again in the third when Aubel singled and Brooklyn Gaurnier walked but Waverly picked up the final out on a fielder's choice at second.

Cooney walked with one down in the fourth, but Gilbert retired the side, then Owego would double its advantage in the bottom of the frame. Carly Kirtland reached on a dropped third strike and moved to third on an error and Donovan's sacrifice bunt, then made it 2-0 on Dalton's fly out to center.

The Wolverines responded with a run of their own in the top of the fifth. Shaw was beaned by a pitch, moved to second on a Bella Romano ground out and scored on Olivia Robinson's ground ball single off the glove of diving shortstop Dalton.

The Indians threatened to increase their lead in the bottom of the fifth on a Terry single, Aubel sacrifice bunt and Gaurnier walk, but Lauper struck out the last batter to keep it a one-run game.

Lea VanAllen singled to lead off the sixth, but Gilbert retired the side.

In the seventh, Romano reached on an error, but Gilbert retired the final two batters.

Gilbert, who recently recorded her 200th career strikeout, fanned 10 batters on the day. She scattered three hits and four walks as the Indians improved to 12-6 on the season.

The veteran hurler appeared to get stronger as the game progressed.

"She really started to come into her zone in the last couple innings and that's what we were starting to," Witman said. "We needed to actually hit the gaps. We were hitting the ball, but we were hitting right to them and that doesn't help."

"I thought she had better command as the game went along," Doane added. "I think she was really nervous. This was our first time hosting the sectional game in quite a while. These kids have really been working hard for this, so this is a big day for them. She wanted to go out and perform her best and I think that as she got deeper into the game the nerves kind of went away and all that hard work started to pay off and she kind of got in a groove."

She handcuffed Owego pretty well with the exception of the one inning.

"She did a nice job," Doane said. "She kept us off balance. She threw us in, she threw us out, mixing a little bit of a change, mixed some speeds on us, kept us on our toes in there, really didn't give us anything to really hammer on, so she did a nice job keeping her team in the ball game."

"Michaela coming up this year, I had an option between Michaela and Olivia Robinson and her coming up this year and really stepping to the plate after not pitching at all last year on varsity, it was huge," Witman said. "She's worked really hard all year to find her zone, to find her pitches, and she did a great job at this game. She was a hurler today."

Terry and Aubel were the only players to register multiple hits, Aubel going 2-for-2 and Terry going 2-for-4.

Waverly ended its season with a 9-9 record.

"This was our best-played game and we really enjoyed playing against them, and I hope they do really good in the postseason," Witman said.