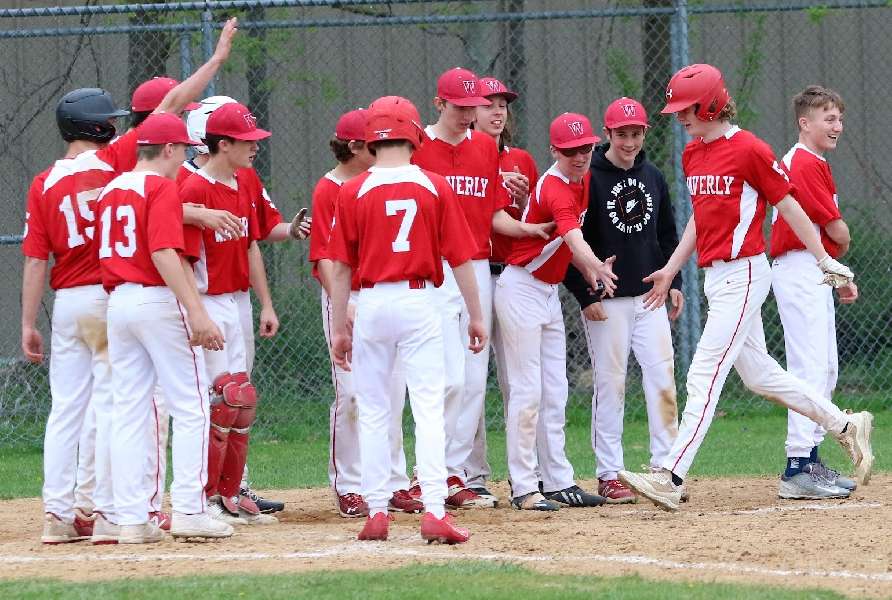 WAVERLY — Waverly pulled away in the middle innings on its way to a 16-6 six-inning win over Tioga here Thursday afternoon in IAC junior varsity baseball action.

The junior Wolverines took a 2-0 lead in the bottom of the second inning on a one-out RBI triple by Thomas Morley, and an RBI single by Nehemiah Anthony.

The Tigers tied the game in the top of the third inning. With one out, Zach Mumbulo reached on an error, and Brennan Sindoni followed with a double to put runners on second and third.

Luke Powell put Tioga on the board with an RBI single, and Sindoni scampered home on an error on the play to make it 2-2.

Waverly answered with three runs in the home half of the inning in a rally that featured RBI singles by Sean Bubniak and Ryan Bostiwck.

Waverly added five more runs — all with two outs — in the fourth to make it 10-2.  Charlie Larrabee singled to spark the rally, then Ben Shaw worked a walk.

Carter George ripped a two-run triple, and scored on an RBI single by Bubniak to give Waverly an 8-2 lead. The Wolverines added two more runs on bases-loaded walks to Morley and Anthony.

Tioga closed the gap to 10-4 in the top of the fifth on an RBI groundout off the bat of Gavin Fisher, and an RBI single by Cameron Rought.

The Tigers cut further into the lead with two unearned runs in the top of the sixth to make it 10-6.

Waverly finished off the game with six runs in the bottom of the sixth inning to invoke the 10-run “mercy rule.”

Dustyn Gingerich’s RBI single made it 13-6, and George ended the game with a three-run walk—ff home run to left field.

George homered and tripled, scored three runs, and had five RBI to lead Waverly at the plate, while Bubniak singled twice, scored two runs, and drove in two, and Morley tripled and singled, scored twice, and knocked in two runs.

VanHouten earned the win for Waverly, allowing five runs — three earned — on six hits, while striking out five and walking two. Anthony closed out the game, allowing an unearned run in 2/3 innings, with two strikeouts and one walk.