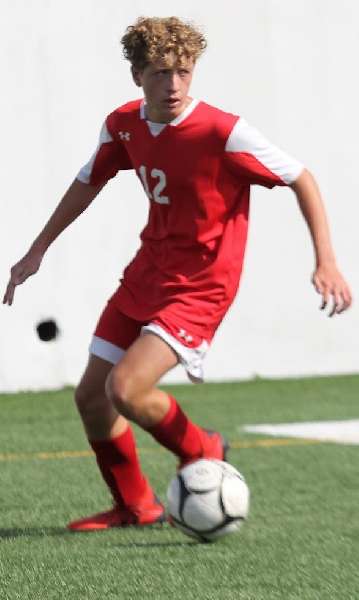 Waverly improves to 4-3 on the season, while Newfield falls to 6-4.

“It was a really good win for the boys tonight,” said Waverly coach Eric Ryck. “To come out tonight and play the way they did after a hard game (7-0 loss at SVEC) the night before showed a lot of grit. They really stepped up tonight and played quality soccer, some of the best we’ve played all season.

“Their work rates and decision-making were on-point tonight,” he noted. “We started off a bit rocky and gave up an early goal on a free kick just outside the box, but we were able to gather ourselves up and control possession for the rest of the half.

“We were creating a lot of opportunities but just couldn’t find the back of the net until Sheldon Huddleston was able to find Ethan Gorsline’s head in a beautiful cross late in the first half..

“The boys came out in the second half with the same energy, controlling possession and creating opportunities,” added Ryck.

Newfield’s Zach Taylor scored three minutes into the game on a free kick from 30 yards out, but sophomore Ethan Gorsline’s goal, off a feed from senior Sheldon Huddleston in the final minute of the first half tied the game at 1-1.

With 16 minutes remaining in the game, Schillmoeller played a through-ball to Robinson, who beat a defender and the keeper to give the Wolverines a 2-1 lead.

With 9 minutes remaining, Schillmoeller took a free from Robinson in stride and beat the keeper with a hard shot to extend the lead to 3-1.

“Griff Schillmoeller and Peyton Robinson were just in sync tonight and playing world-class balls to each other,” said Ryck. “Peyton fed Griff with two perfect balls, and Griff was able to finish with world-class shots.”

Taylor finished off the scoring with a penalty kick in the final two minutes to provide the final margin.

Aiden Doherty registered 16 saves in net for the Wolverines.

“Between the pipes, Aiden Doherty did a great job for us, and I was very impressed with his instincts and growth in confidence as the game progressed,” said Ryck.