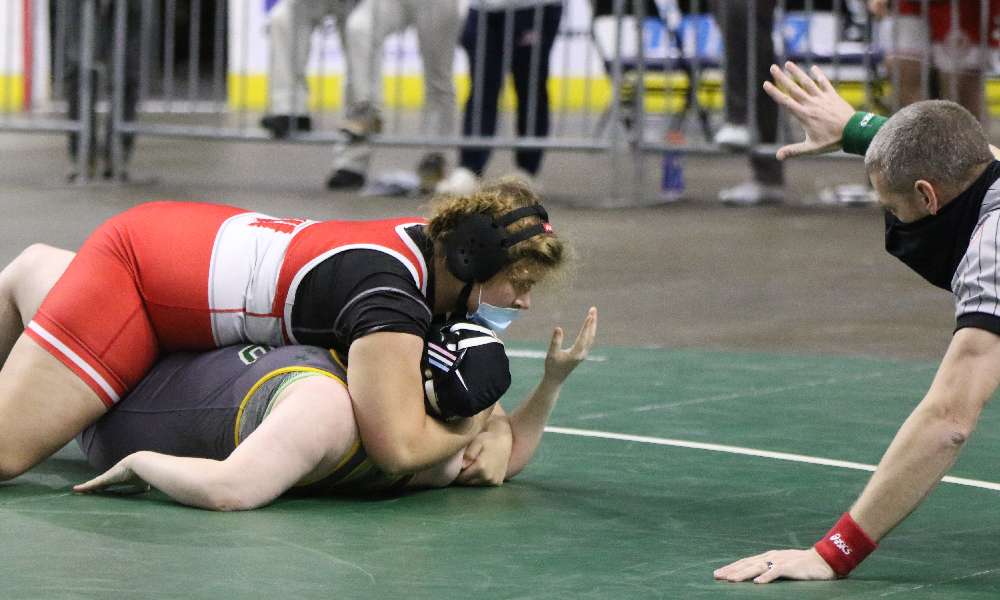 Waverly coach Devan Witman is pleased that Section IV was pro-active in starting the girls tournament.

“I think it was very exciting,” he said. “I think it’s awesome for our sport. Girls wrestling has been growing across the nation. It’s about time Section IV and New York State ups its game in girls wrestling, and I think this was a big step forward.”

Witman also looks forward to growing the sport at Waverly, and believes LaForest and junior Lillyparker Ennis, who also wrestled Saturday, will be a big part of it.

“Waverly looks to be one of the first in the Section to create a board-approved girls wrestling team,” he said. “These two certainly put us on the map.

“It’s going to be awesome moving forward with these two leaders on the team,” added Witman.

The next time you’re sitting around with friends talking sports trivia, you can ask “Who was the first-ever girls wrestling champ in Section IV?” The answer: Emily Sindoni.

Sindoni used her patented “dump” to score three takedowns in each of her matches, before finishing off her opponents in less than a minute to win the 126-pound title.

“I told her, ‘if you want to get three takedowns that’s great, but we want the first women’s Sectional champ, so you better get off the mat first,” laughed Tioga coach Kris Harrington. “She said, ‘no problem, I got it.’”

“We’re not shocked she won,” said Harrington. “Emily is really good, I think we forget about that some time.

“She was a starter on a Section IV and state championship team,” added Harrington. “She looked great.”

“There are not enough good things I can say about Emily,” said Harrington.

“She shows up every day. She’s Jayden Duncanson’s primary training partner … he attributes a lot of his success to Emily,” noted Harrington. “He learned how to drill from her, and she’s grinding on him. She is not an easy out for anyone.

“Today was great for Emily,” added Harrington. She got to show out in front of a big crowd.”

LaForest also scored a pair of first-period falls to earn the 189 / 215-pound title.

She decked Unadilla Valley-Unatego’s Isabelle Breslau in 1:03 in her opening match, and followed it with another pin of Breslau in 71 seconds to win the 2 out of 3 series for the title.

“She’s battled all year,” said Witman. “She has competed with the boys all season, even picking up a couple wins for us along the way.

“Mackenzie is always battle-ready,” he noted. “She makes it to every practice, and puts in the extra effort.

“She gives it everything,” said Witman. “She is definitely going to be instrumental to our girls wrestling program moving forward.”