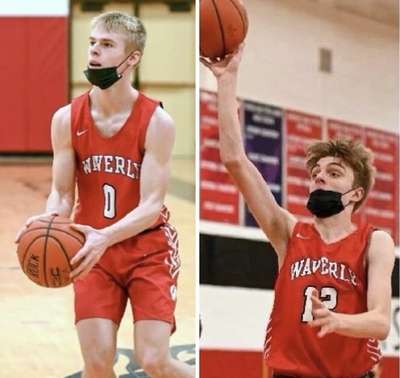 Watkins Glen’s Adam Pastore was honored as the divisional MVP.

FIRST TEAM
Joey Tomasso, sophomore, Waverly: A tremendous athlete, with a smooth and deadly jumper, Tomasso averaged 19.6 points, 2.8 rebounds, 2.3 assists, and 2.3 steals per game. He shot 49 percent from the field, and also knocked down 35 3-pointers.

Brennan Traub, senior, Waverly: A dangerous 3-point shooter, who could finish in transition, Brennan Traub averaged 12.3 points, 3.3 rebounds, 2.2 assists, and 1.7 seals per game. He made 35 3-pointers on the season.

Davis Croft, senior, Waverly: A strong all-around player with a good basketball IQ, Croft averaged 7.1 points, 6.3 rebounds, 2.3 assists, and 1.5 steals per game. He led the team in assists, shot a team-best 49.5 percent from the field, shared the team-lead in blocked shots, and was second in rebounds.