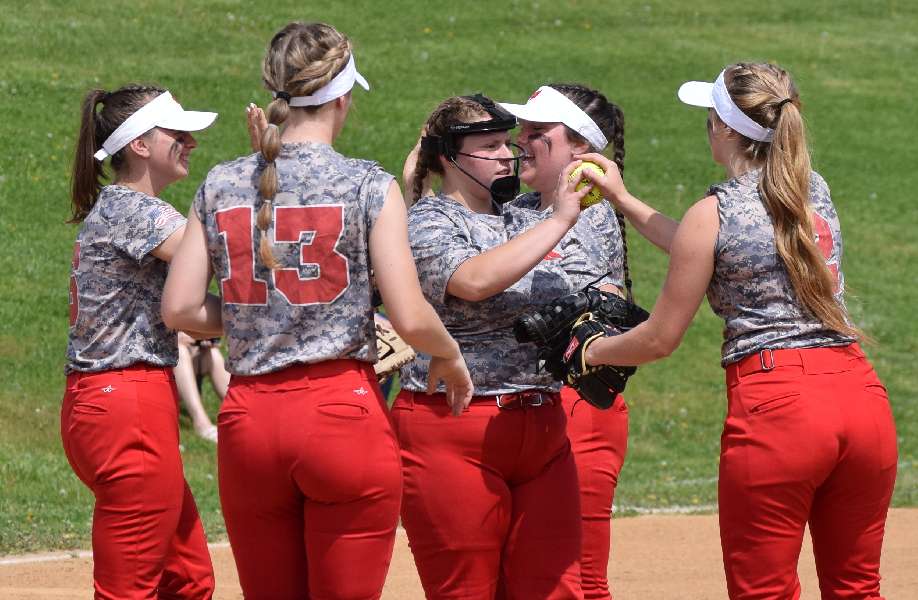 WAVERLY RALLIES PAST SAYRE, 9-6, IN 'BATTLE AT THE BORDER' OPENER

SAYRE — Waverly plated five runs in the top of the sixth inning in a come-from-behind, 9-6, win over Sayre here Saturday morning in the opening game of the softball “Battle at the Border.”

Meghan Flynn belted a double in the bottom of the first inning, and scored on a wild pitch to give Sayre an early 1-0 lead.

Olivia Robinson led off the top of the second with a double, and scored on a ground out off the bat of Peyton Shaw to tie the game at 1-1.

Abbie McGaughey led off the Sayre third inning with a double, and scored on a groundout off the bat of McKenna Garrison to give the Lady Redskins a 2-1 lead.

Aubrey Ennis sparked a two-out rally in the top of the fourth with a single, and scored on an RBI triple by Robinson to tie the game at 2-2.

The Lady Redskins answered with two runs in the bottom of the fourth inning, taking advantage of two hit batters, and a walk to load the bases, before a two-out error allowed two runs to score to give Sayre a 4-2 lead.

Shaw led off the top of the fifth with a double, and scored on a one-out RBI single by Natalie Lauper to trim the deficit to 4-3.

Waverly took a 5-4 lead in the top of the sixth on an error that allowed two runs to score.

After Robinson walked, and Lea VanAllen singled to re-ignite the rally, Shaw was hit by a pitch to load the bases.

After Robinson scored on a passed ball, Faith Blauvelt hit a two-run single up the middle to extend the lead to 8-4.

Waverly added an unearned tun in the top of the seventh to make it 9-4.

Raegan Parrish reached base on a dropped third strike to lead off the bottom of the seventh inning, and took second on a single by Aliyah Rawlings.

With two outs, McGaughey delivered a two-run single to close the gap to 9-6, but Waverly reliever Michaela Lauper recorded a strikeout to end the game.

Michaela Lauper earned the win for the Lady Wolverines, allowing two unearned runs on three hits, while striking out eight and walking none in three innings.

Robinson started in the circle for Waverly, allowing four runs — one earned — on three hits, while striking out seven and walking two in four innings.

Natalie Lauper singled and drove in one run in the win, while VanAllen and Ennis each singled and scored one run, Michaela Lauper added a single, Bella Romano scored two runs, and Lourden Benjamin crossed the plate once.

Garrison had two RBI for the Lady Redskins, and Olivia Corbin and Parrish each scored one run.

Corbin was tagged with the loss for Sayre, allowing six runs — five earned — on five hits, while striking out three and walking four in 5 1/3 innings.

Parrish finished off the game, allowing three runs on three hits, while striking out one and walking three in 1 2/3 innings.