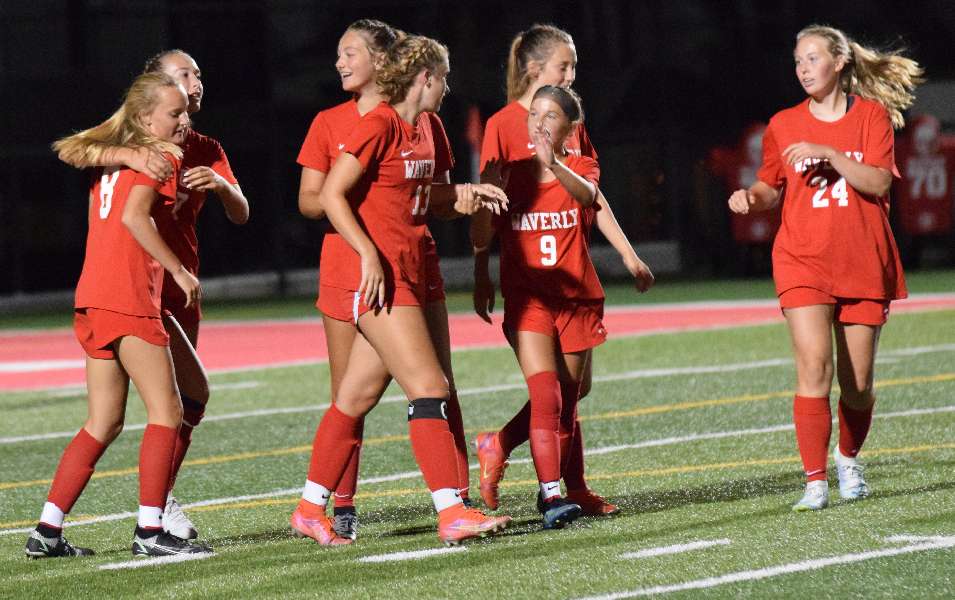 “'Wow,’ that would be my first reaction to tonight's game,” said Waverly coach Tara Hogan. “We had forwards making great runs and taking great, well-placed shots, and defenders not letting a single person get by.

“And, every sub that came off the bench was ready to go,” added Hogan.

Sophomore Addison Westbrook put Waverly on the board 6 1/2 minutes into the game, scoring off a corner kick from Kennedy Westbrook.

About 5 1/2 minutes later, VanAllen took a feed from 8th-grader Makenzie Olmsted, beat a defender, then beat the keeper in a 1-on-1 to make it 2-0.

Dryden answered with a goal with 25:07 remaining in the first half to trim the deficit to 2-1, and the teams battled without a goal for nearly 35 minutes.

With 30:18 remaining in the game, Kennedy Westbrook took a pass from Olmsted at the top of the 18, and rifled a shot through the keeper’s hands and into the net to make it 3-1.

With 15 minutes remaining, VanAllen added an insurance goal with a header off a cross into the box by 8th-grader Lauren Gorsline.

Hogan praised the performance of several of her players after the game.

“Kennedy (Westbrook) went back and forth between stopper and center-mid tonight,” said Hogan.  “Her energy and ability to be everywhere we need her to be is second to none. She is an incredibly hard-working player.

“Newcomer Makenzie Olmsted is absolutely fantastic,” noted Hogan. “She is a ball of energy. You can just tell she thrives on being able to be involved in all plays.

“She saw time at stopper and center-mid,” continued Hogan. “Not only did she ‘hold her own,’ she far exceeded my expectations.

“Another major standout was newcomer Lauren Gorsline,” added Hogan. “She got a few shots off and had a beautiful assist to Lea VanAllen. Lauren and Makenzie are players I can, and have, put on every single line — forward, midfielder, defender.”

Hogan also praised the play of her defense.

“Paige Robinson is filling the very large shoes left by Bella Romano, and doing a very good job if it,” she said. “She has blown me away already with how well she is playing this position.

“I have 100 percent faith in her,” noted Hogan. “I even said to her, ‘it's not a glamorous position but it's the most important.’

“Claire Clonch and Olivia Robinson continue to impress me by holding down the line with Paige,” added Hogan. “They are all smart and never shy away from contact.”

Sophomore Lea Cole had one save in net for the Lady Wolverines.