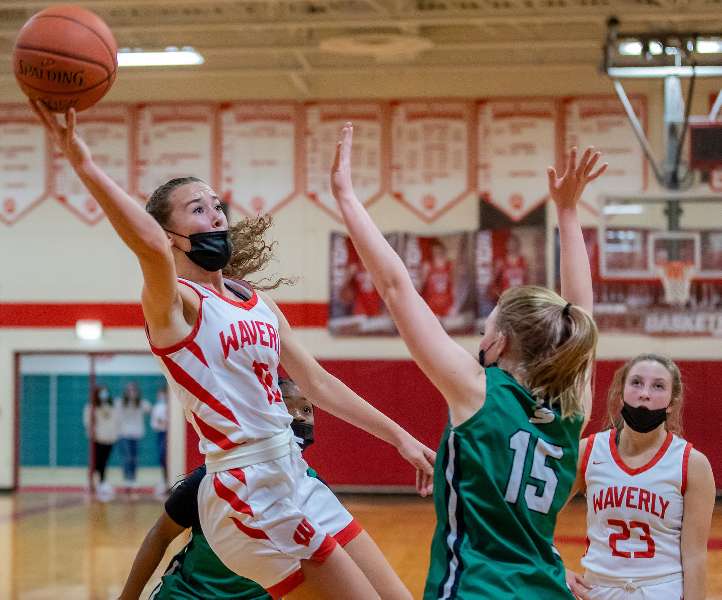 WAVERLY — Waverly raced out to a double-digit lead early, and pulled away in a 59-27 rout of Seton Catholic here Saturday evening in the quarterfinals of the Section IV, Class B girls basketball playoffs.

Junior Kennedy Westbrook was 4-for-4 from the free-throw line, and scored eight points in the first quarter, while freshman Addison Westbrook scored four points, and senior Olivia Nittinger drained a 3-pointer to help the Lady Wolverines to a 17-7 lead after the first eight  minutes.

Addison Westbrook scored four more points in the second quarter, and sophomore Peyton Shaw added a 3-pointer in a 12-3 run that extended the Waverly advantage to 29-10 at the half.

Waverly knocked down four 3-pointers in the third quarter — by Addison and Kennedy Westbrook, Nittinger, and sophomore Paige Robinson — fuel an 18-9 run that gave Wavily a 48-18 lead heading into the final eight minutes.

Kennedy Westbrook led a balanced Waverly attack with 15 points, while Nittinger scored 11 points, including a trio of 3-pointers, Addison Westbrook had 11 points, Robinson added 10 points, and Shaw chipped in with eight points.

Waverly, now 16-5, will square off with top-seeded Norwich, now 14-6, in the Class B semifinals. Norwich advanced with a 64-28 win over eighth-seeded Whitney Point.