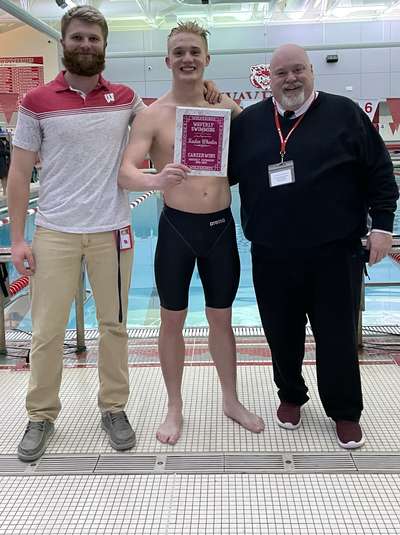 The meet was punctuated by a celebration for Wheeler recording 200 career wins. The Wolverine senior actually reached 200 wins last season (and now has 230 wins), but Waverly’s coaches chose to wait until this year’s Senior Night to celebrate so fans could be present.

Meanwhile, Oscar Williams hit the individual state cut time in the 50-yard freestyle and will compete at States.

Oscar Williams, Wheeler, Sackett, and Wright teamed to win the 400-yard freestyle relay in a time of 3:35.91.

Wheeler, Clark, Marrone and junior Sheldon Huddleston teamed to win the 200-yard medley relay in a time of 1:53.51.