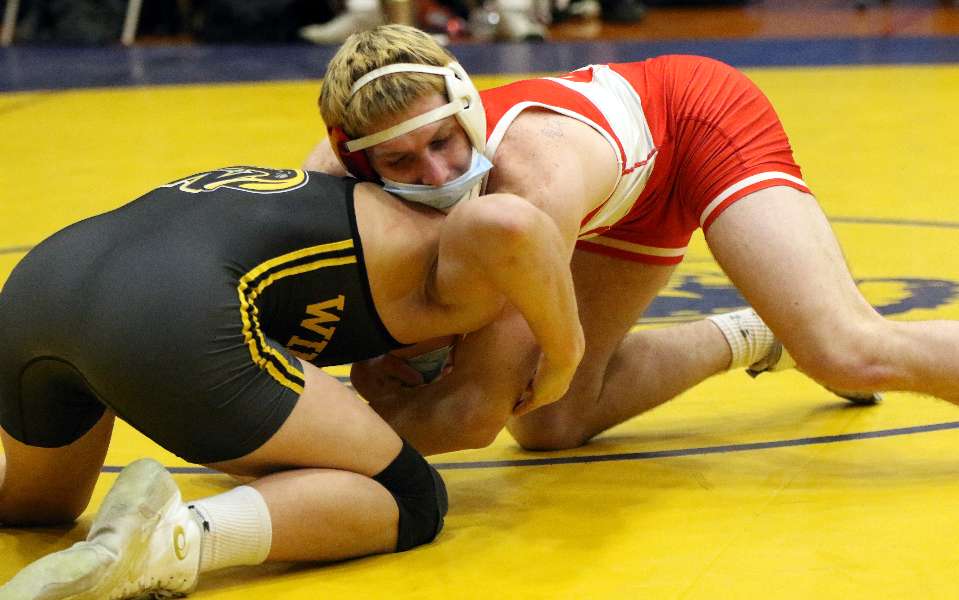 TIOGA CENTER — You don’t have to win your bout to help your team win a match, and sixth-seeded Waverly proved that Wednesday night in its 33-32 win over third-seeded Windsor in the quarterfinals of the Section IV, Division 2 Duals.

The Wolverines took advantage of five forfeits from the Black Knights, and only won one bout on the mat, but a pair of Waverly wrestlers avoided giving Windsor bonus points in their losses, including junior Braeden Nichols, who dropped a 17-1 technical fall to Ethan Dibble, to ensure the win.

“Braeden (Nichols) and I had this conversation last weekend at the McCloe Duals. We talked about the fight he has because there was a couple times when he was down and ended up losing,” said Waverly coach Devin Witman. “I think that really hit home with him because that’s the hardest I’ve seen him fight all year, and it ended up paying off because that (point) was the difference in the match.”

Windsor’s Garrett Bidwell opened the match with a 3-2 decision over Waverly freshman Kam Hills at 285 pounds to give the Black Knights a 3-0 lead.

With Dibble’s technical fall, and a pin by Ryan Kennedy at 152, Windsor had closed the gap to 30-20.

There was no match at 160, and then Waverly junior Gage Tedesco sewed up the win for the Wolverines with a 5-3 win over Mason McCombs at 172 pounds. McCombs is the top-ranked 160-pounder in Section IV.

“It’s not a match-up we were expecting,” said Witman. “Not in a million years did I think they were going to bump McCombs up.

“I thought they’d test (Dominick) Weaver against Gage (Tedesco),” noted Witman. “That’s the match we were preparing for. I didn’t think there was anyway we could dodge around Weaver, but they did it for us, and it ended up in our favor.”

“(Windsor) has been giving up four or five forfeits every match … we had it figured that if they gave five, we’d have to win two matches,” said Witman. “We only ended up winning one, which doesn’t feel great, but it was a big one, and it won us the match.

“I give a ton of credit to (Windsor) coach (Jeff) Nolan, he’s one of the great coaches in Section IV,” he added.

Waverly’s run would end in the semifinals with a 52-15 loss to second-seeded Walton-Delhi.

Witman said his younger wrestlers will benefit from getting two matches at the Duals.

“This is huge for our younger wrestlers,” he said. “It’s awesome our two seniors get to experience this before they graduate.

“To be here as a freshman, sophomore or a junior is huge for these guys because I don’t plan on leaving,” noted Witman. “Now that we’re in, I plan on being here every year.

“We’ve got some good classes coming up, and with this experience I think it’s only going to help us,” he added.

Walton-Delhi raced out to a 40-0 lead, thanks in large part to five falls and a forfeit, before junior Braden Hills fought off his back early in the first period to score a fall of Kyle Miller at 1:46 at 152 pounds.

At 172 pounds, Tedesco forged an 11-5 win over Nick Lane for Waverly’s second win.

Kam Hills closed out the night for the Wolverines wth a headlock-takedown and pin of W-D’s Landon Taylor in 42 seconds.

Waverly returns to action Saturday when it hosts the IAC Championships.