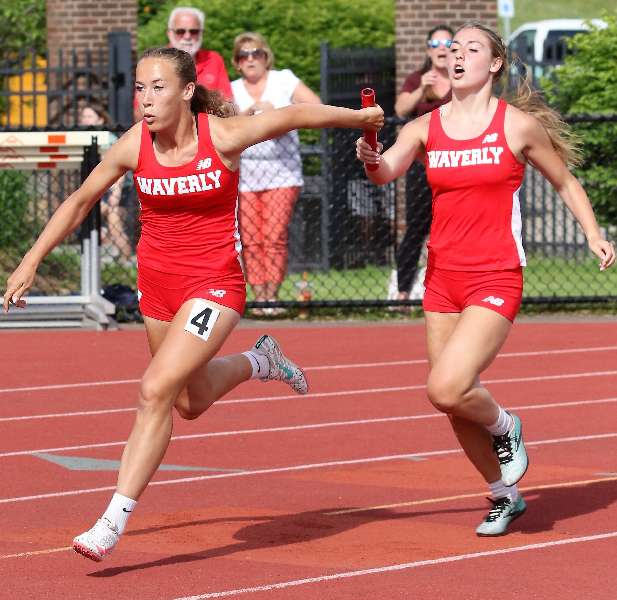 “It was a really special evening for Waverly track and field,” said Waverly coach Dave Hogan. “Our athletes came into today knowing they had more work to do and more to prove.

“We’re so proud of them for the work they’ve put in this season and the commitment they’ve made to the sport and this team,” he added. “They responded to the competition the Section threw at them, and rightfully earned this trip to the state meet.”

The 400-meter relay team of juniors Abbey Knolles, Natalie Garrity, Kennedy Westbrook and senior Olivia Nittinger in 51.54 seconds. They ran the fastest time in the prelims at 50.99 seconds.

“The girls 4-by-1 relay ran an extremely smooth trial race today and PR’ed,” said Hogan. “Their trial was admittedly not their best race this season, with some sloppy handoffs, but the girls are extremely resilient and experienced, and still pulled out a close second to capture first in Division 2.”

Knolles, NIttinger, KennedyWestbrook, and freshman Addison Westbrook finished third in the 1,600-meter relay in a time of 4:20.04.

Freshman Harper Minaker placed third in the 2,000-meter steeplechase in a time of 8:18.93 — more than 30 seconds off her school-record time last week at the Class C Championships.

Sophomore Paige Robinson was sixth in the pole vault at 8-feet, 1-inch.

Notre Dame won the Division 2 team title with 51 points, well ahead of runner-up Chenango Forks, which had 30 points, while Waverly, Tioga, Sidney and Trumansburg tied for ninth with 16 points.