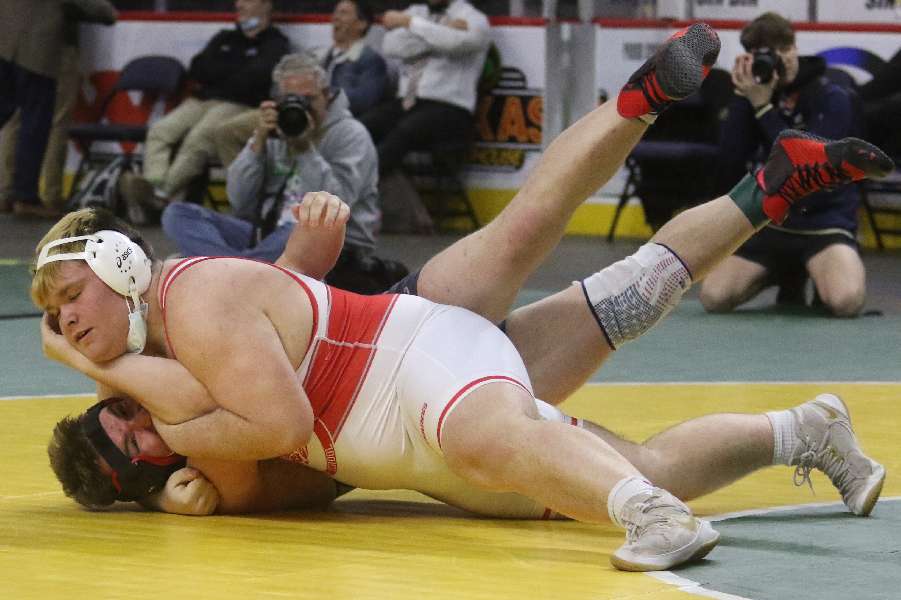 Kam Hills went 3-0 on the day, including a pair of first-period falls, to claim the 285-pound bracket,, while Beeman won three close decisions, including two in wrestlebacks, to finish third at 215 pounds. (For the first time ever, Section IV sends its top three finishers in each weight class to the State tournament.)

Kam Hills, the third seed, opened with a 26-second fall over Lansing’s Caleb Georgia. In the semifinals, he put second-seeded Logan Jamison on his back for a five-point move in the final seven seconds of the first period on his way to a 6-1 win.

In the finals, Kam Hills slapped a headlock on top-seeded John Hammond of SVEC, and finished off the fall in 35 seconds.

“I can’t describe how proud I am of Kam (Hills),” said Waverly coach Devan Witman.

“He had a goal in mind at the beginning of the year,” he noted. “It had to start with him making weight … that’s all behind us, he’s not struggling to make that weight anymore.

““He’s one of the most athletic 285-pounders in the state. Anyone who grabs a hold of him realizes that real quick,” continued Witman. “He’s made such tremendous progress this season.

“The first thing he said coming off the mat was ‘next up States,’” added Witman. “He has goals in mind, and he’s going to keep going after them.”

Beeman, the fourth seed, scored a third-period takedown in a 4-2 win over fifth-seeded Will Pettit of Walton-Delhi in the quarterfinals.

After dropping a 3-2 decision to Windsor’s top-seeded Garrett Bidwell, Beeman scored a 1-0 win over Tioga’s Josh Snell in the consolation semifinals, then edged Pettit again, this time 3-1, in the third-place match, again scoring a third-period takedown.

“He wrestled Bidwell tough in the semifinals,” he noted. “He made one mistake … in the 215-, 285-pound weight classes one mistake can be the difference.

“He gritted it out, and came back for third place.

“He gutted out a 1-0 win (over Tioga’s Josh Snell), then he beat (Walton-Delhi’s Will) Petit for a third time this season,” added Witman. “It’s hard to beat a good wrestler three times, but he did it and he’s headed on to States.”

Tedesco, the second seed at 172 pounds, opened with a 6-3 decision over Groton’s Darian Mitchell in the quarterfinals, but dropped a 3-2 decision to second-seeded and eventual champ Hunter Page of Oxford-Green in the semifinals.

Tedesco edged Tioga’s Trent Browne, 3-2, in the consolation semifinals, then thrown to his back by fourth-seeded Tristan Harrington of Sidney for a 38-second fall in the third-place match.

“He’s going to put in a lot of work in the wrestling room and the weight room, and he’s going to come back a different wrestler next year,” added Witman.

Stotler, the fourth seed at 132 pounds, opened with a 5-3 overtime loss to Deposit-Hancock freshman Landen Estus in the quarterfinals. He bounced back with a pin of SVEC’s Shane Neal in 1:45 in the consolation bracket opener.

In his next bout, Stotler dropped a 3-2 decision to W-D’s Noah Sovocool. In the fifth-place match, Stotler decked M-E’s Matt Boyce in 2:44.

“It was a little unexpected for Connor (Stotler) to lose in the first round, especially when he was leading most of the match,” said Witman.

“We didn’t get the calls we need, but no excuses, you have to take it out of the ref’s hands,” he added.

Senior Andrew Kimble, the eighth seed at 189 pounds, opened with a pin of Tioga’s Thomas Hurd in 5:46 in the pigtail round.

Kimble lost by fall in 1:28 to top-seed Gabe Monroe of Windsor in the quarterfinals, then lost via fall to Marathon’s Trevor Hurlburt in the consolation bracket.

“It was his first time making the Sectional tournament, and he got a win,” said Witman.

“I’m super-proud of the time Andrew’s put in, in the room,” noted Witman. “He’s come out every year since he was in 8th grade, and he gave me his all. I really appreciate all the effort and leadership he’s given us.”

Junior Braeden Hills, the 10th seed at 160 pounds, opened with a pin of seventh-seeded Dom Fazzary in 2:59 in the pigtail bracket, but lost via fall to second-seeded Emmett Wood and Oneonta’s Ardell Wellman in 2:56.

Freshman Jake Besecker, the 10th seed at 118 pounds, was 0-2 on the day, dropping g a 4-0 decisions to Marathon’s Brendan Gumaer in the quarterfinals, then, in wrestlebacks, losing via fall to Groton’s Kris Willard in 2:46.

“This was a good experience for Jake (Besecker) and Braeden (Hills),” said Witman.

“Jake’s only a freshman … to get here and lose two close ones was heartbreaking, but, hopefully he’ll learn from the experience and come back strong.

“Braeden wrestled his butt off,” continued Witman. “He just doesn’t have all that much mat experience.

“He’s going to be a different wrestler next year after having this experience here in the Arena,” added Witman.

Kam Hills and Beeman will be in action Feb. 25-26 at the New York State Division 2 Championships at the MVP Arena in Albany.