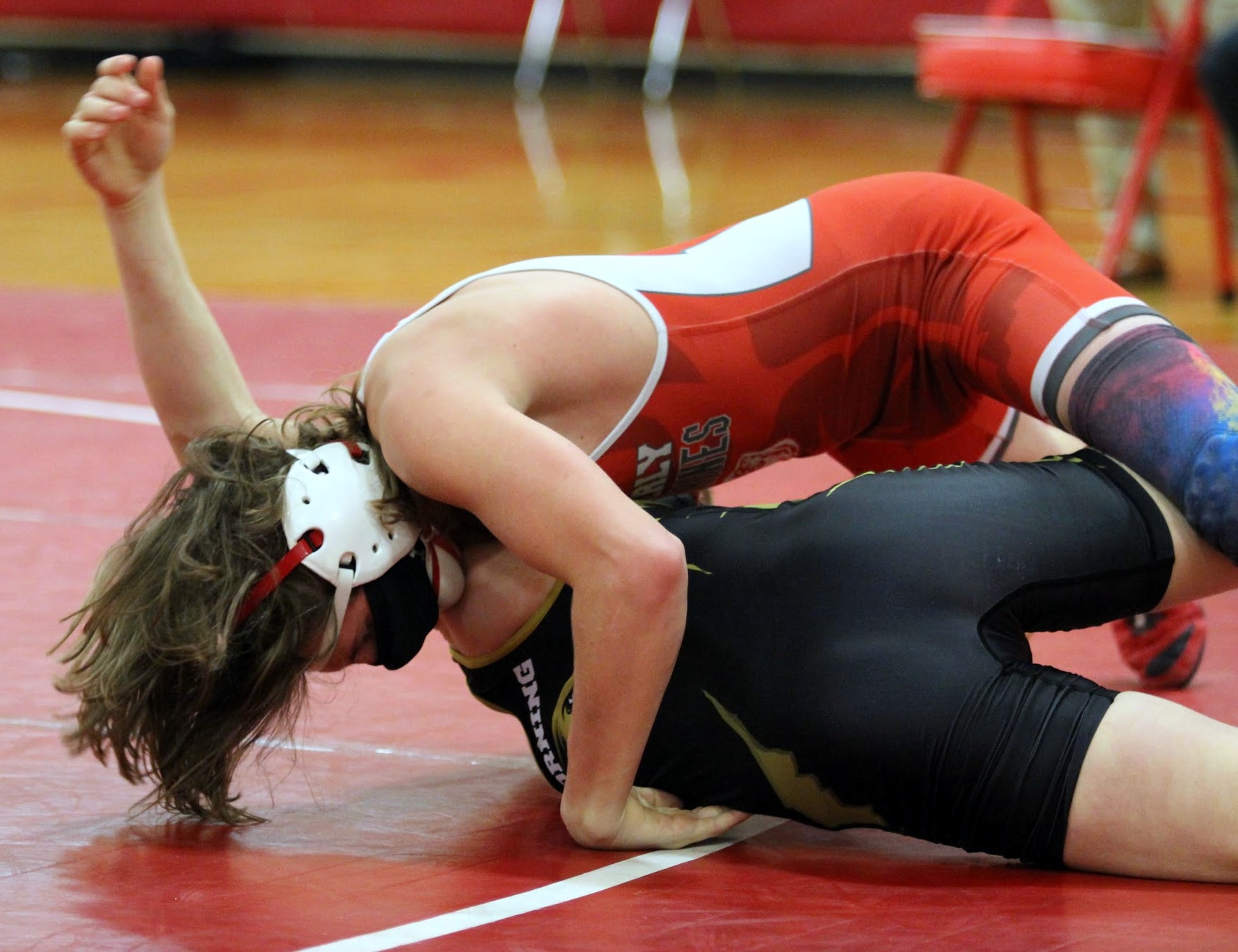 WAVERLY WINS 13 OF 24 BOUTS AGAINST OWEGO, ELMIRA IN FINAL MATCH

OWEGO — Waverly wrapped up its truncated 2021 wrestling season Saturday, winning 13 of 24 bouts in a tri-match here against Elmira and Owego.

Sophomore Connor Stotler, who finished the shortened season with a 17-3 record, led the Wolverines with a 4-0 record. He registered four falls, including three in the first period. 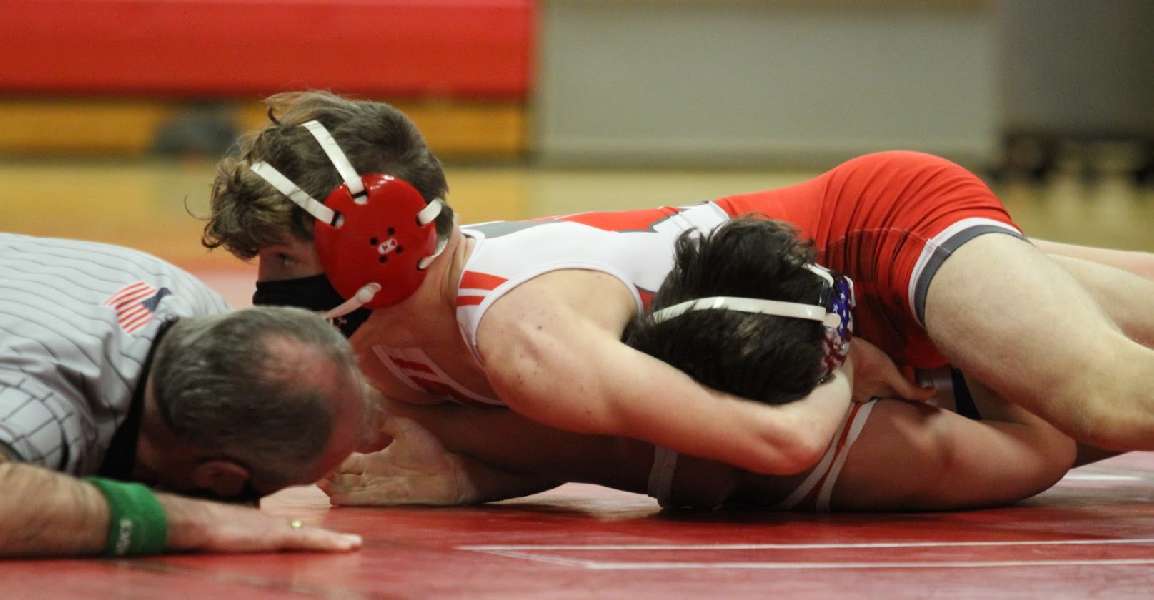 WAVERLY WINS 13 OF 18 BOUTS AGAINST THOMAS A. EDISON

Stotler was 3-0 — all via first-period falls, while Beeman — via pins in 26 and 41 seconds, and Speer, who registered a pair of second-period pins, were both 2-0.

All 13 of Waverly’s wins were by pin fall.

Landon McCarty, who traded falls with Spartan 8th-grader Lucas Mosher, was 2-1, while seniors Andrew Kimble and Kam Peters, and sophomore Gage Tedesco were each 2-1. 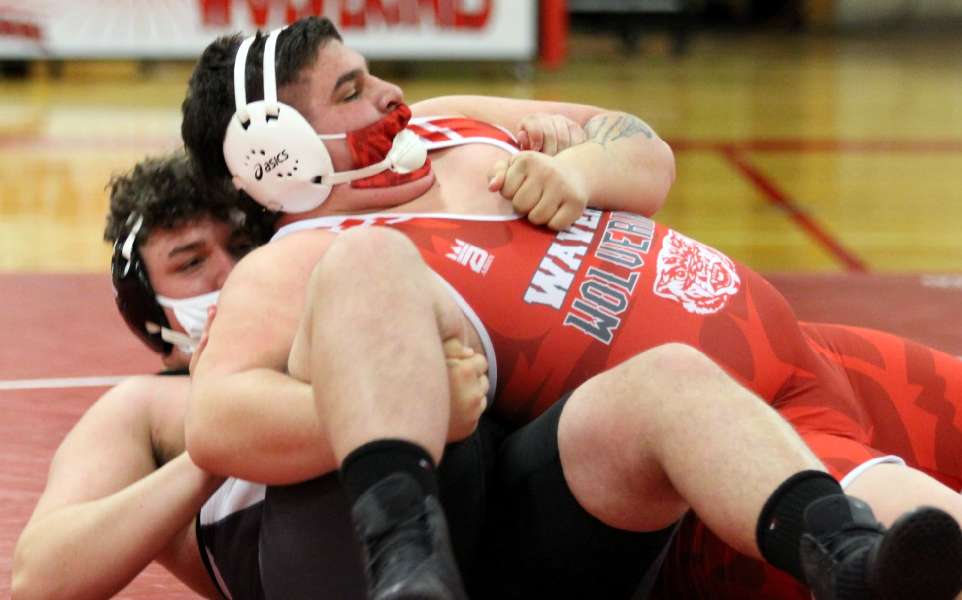 Speer was 2-0 on the day, both by fall — the first at 215 pounds and the second at 285. He also recorded the fastest pin of the day for the Wolverines in 30 seconds.

Senior Kam Peters (285), and sophomores Gage Tedesco and Ty Beeman each recorded a win by fall for Waverly, and junior Derek Bartlett won a 7-0 decision over Corning’s Emily Landolfi at 138 pounds

In all, Waverly won nine of their 21 bouts on the day.

Waverly returns to action Wednesday when it hosts Thomas A. Edison 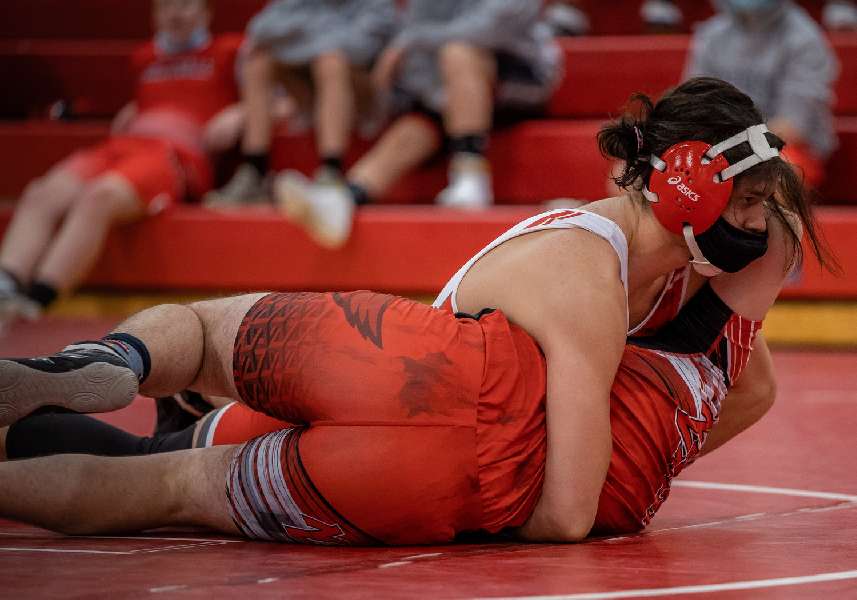 The Wolverines came away with 11 victories in 25 bouts, including an overtime thriller as Beeman would defeat NV's Joe Woodmansee, 4-1, in tie-breaker 2 at 215 pounds.

Trailing, 1-0, Beeman used a third-period escape to force sudden victory. He would build a 4-1 advantage with an escape and takedown in the TB1 period and ride out the Cardinal standout in TB3. Beeman's other win was a first-period fall.

The only other match to go at least six minutes was Gage Tedesco's 4-1 decision over Woodmansee. Tedesco won a second bout with a first-period pin.

McCarty and Stotler registered two first-period falls apiece and matched each other for the fastest Waverly pin of the night — 33 seconds.

The Wolverines' other wins were first-period falls by Derak Thorpe and Andrew Kimble, and a second-period pin by Braedon Nichols. 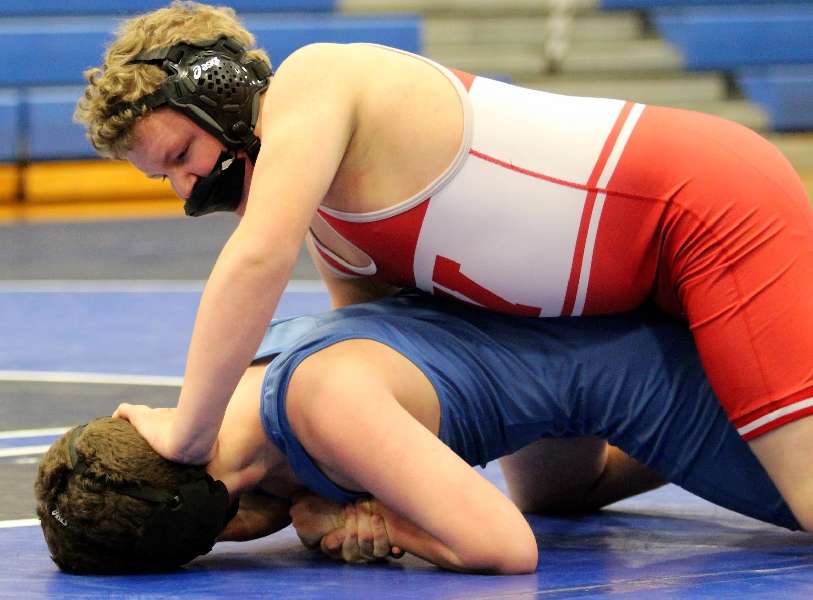 HORSEHEADS WINS 14 OF 22 BOUTS AGAINST WAVERLY

Only one of the 22 bouts went a full six minutes, with Horseheads winning all 14 bouts by fall, and Waverly winning seven of eight by fall.

Waverly returns to action Friday when it hosts Newark Valley.

After neither team sent a wrestler to the mat for the 102- and 110-pound bouts, Waverly 8th-grader Derek Thorp received a forfeit at 118 to give the Wolverines a 6-0 lead.

Sophomore Landon McCarty, who hasn’t wrestled since 5th grade, scored a fall over O-M / WG’s Bradley Cantineri in 2:38, and sophomore Connor Stotler, a returning Section IV place-finisher, followed with a pin of Brandon Davis in 56 seconds to give the Wolverines an 18-0 lead.

Senior Trevor Meyers gave the Wolverines the lead for good at 189 pounds with a 9-3 decision over Braiden Ventra to give Waverly a 27-24 lead.

Sophomore Gage Tedesco kept it rolling for Waverly, forging a hard-fought 3-2 decision over Joshua Beckley at 215 pounds to extend Waverly’s lead to 30-24.

Sophomore Ty Beeman sewed up the win for the Wolverines with a pin of Stephen Barrett in 2:10 in the 285-pound bout.

Extra Matches: Waverly won 10 of the 14 “extra matches,” including eight by fall.

Stotler and Kimble each registered a pair of falls, and Meyers won a pair of decisions for the Wolverines. Senior Kam Peters, sophomore Anthony Speers, freshman Braedon Nichols, and Tedesco each won by fall.

TIOGA CENTER — Tioga won six of the seven contested weight classes, including five by fall, and picked up five forfeits in a 63-9 win over Waverly here in the opening IAC wrestling match of the season for both teams.

“I thought for our first match it went really well,” said Tioga coach Kris Harrington. “Our guys did a nice job.

“There’s an adjustment wrestling with the mask, and I think we’ll see that this week,” he added. “I think once we get into next week, and the following week everyone will feel better about it.”

Waverly coach Devan Witman said he knew what his team was up against in Tioga, the two-time defending state champions, and four-time defending Section IV champs.

“I have to give my guys credit,” he said. “We weren’t scared of this state championship team, the guys went after it.

“We got our butts kicked, there’s no doubt about it,” noted Witman. “Our first match in about a year against New York State champions, I couldn’t ask for much more than the heart our guys showed out there.”

Witman said he saw a number of things he likes.

“We came in here looking at one match at a time,” he said. “We weren’t looking at a team, we were looking at individuals. I saw some really good things from my guys.

“Unfortunately, this is what to expect when you’re only two weeks into the season,” noted Witman. “We weren’t finishing shots, we weren’t getting the checks on top when we needed.

“That said, I saw a lot of good things happening,” added Witman. “Kids who have been off the mats for 12 months now have picked it up in two week’s time.”

After freshman 102-pound freshman Deakon Bailey received a forfeit to start the match off, freshman Levi Bellis gave the Tigers a 12-0 lead with a 30-second fall over Waverly 8th-grader Derek Thorp.

At 118 pounds, returning state champion Gianni Silvestri built a 12-1 lead before pinning Waverly sophomore Landon McCarty in 3:43 to make it 18-0.

“Landon (McCarty) wrestled Gianni (Silvestri), a state champion, and made it to the second period,” said Witman. “He did some things, got in on a couple shots … I saw some good things from him.”

After freshman Tyler Roe received a forfeit at 126, returning state place-finisher freshman Caden Bellis led 5-0 when he finished off Waverly sophomore Connor Stotler for a fall in 1:58 to push the lead to 30-0.

Junior Mason Welch, a returning state place-finisher, kept it rolling for the Tigers with a 43-second fall over Waverly junior Derek Bartlett.

Freshman Trent Browne earned his first varsity win with a pin of Waverly junior Andrew Kimble in 1:49 to make it 60-0 after the 172-pound bout.

At 189 pounds, in the “marquee” match of the night, Tioga junior Emmett Wood, who placed seventh at States last year, grinded out a hard-fought, 6-0, decision over Waverly sophomore Gage Tedesco.

The 189-pound bout caught the attention of both coaches.

“Gage (Tedesco) wrestled a tough match against (Emmett) Wood,” said Witman. “If we were to get that one again, I think it would be close again. I think that’s one that could go either way.”

“Emmett (Wood) going up to 189 and beating a tough kid (Gage Tedesco) was good to see,” said Harrington. “Obviously I’d like to see Emmett a little bit more on his legs, especially in the third period, but it was a good job.”

Waverly senior Trevor Meyers put the Wolverines on the scoreboard at 215 pounds with an 8-4 decision of Tioga junior Josh Snell.

There were also a number of “extra” matches wrestled. (See a full list of results below).

The Wolverines have better numbers this season than they’ve had in several years, but will still have several vacant spots in their line-up.

“We have 15 wrestlers for 13 weight classes, but there are still a lot of holes,” said Witman.

“We’re pretty top heavy,” he added. “We’re about four-deep at 189 pounds, which is unfortunate.”

The reduction in the number of classes in the upper weight doesn’t do Witman any favors this year.

“Now, my whole group is growing together, and not separating as I had hoped,” noted Witman.

“It is what it is though, we’re not necessarily looking at team scores this year,” added Witman. “We’re looking at matches and high-quality wrestling.”

Waverly has several seasoned wrestlers returning, but also has several wrestlers who haven’t seen much, if any, varsity mat time.

“This team isn’t necessarily young, but it is inexperienced to say the least,” said Witman.

“We have our two Section IV place-winners from last year back in Conner Stotler and Gage Tedesco,” he said. “We’re looking for big things from them even with our shortened schedule. They have both been leaders in the room in the early-going.

“Another leader we have in the room is Trevor Meyers. He’s looking to put together the best season he can for his senior year.

“Andrew Kimble has put on some mass,” noted Witman. “He’s a lot taller and a lot thicker. He’s a junior, and he’s been doing the right things in the room … he goes hard all the time, and has really stepped it up.

Witman also has a couple of newcomer he’s high on this season.

“One of our biggest pick-ups this year is going to be Ty Beeman,” said Witman. “He came to Waverly last year, but he didn’t wrestle.

“Looking at him this year, I wish I had him five years ago because he’s going to turn some heads out there this year,” he added. “He’s a strong, physical sophomore … he’s going to give some of the guys he comes up against fits, especially if they don’t know him.”

“Derek Thorp has been wrestling since he was very little,” noted Witman. “He has a lot of PeeWee matches under his belt, and he wrestled modified last year.